Monsanto Attempted to Squash This Report on Glyphosate–Discover What They Don’t Want You to Know!

Monsanto attempted to squash this latest report by the federal agency Toxic Substances & Disease Registry (ATSDR) about the toxicity of glyphosate. This is the proverbial nail in the coffin telling us It’s settled. The evidence is overwhelming that glyphosate is toxic AF and causes cancer. And pretty much everyone who says the contrary looks to be protecting industry interests. Not only has glyphosate been classified by the World Health Organization (WHO) as “probably carcinogenic in humans,” but now another report by ATSDR reminds us that glyphosate is linked to cancer and possibly other diseases as well. If you, like the millions of other Americans, are feeling a bit unsure that eating food containing glyphosate is a good idea, you are not alone. But what can you do about it? We have answers. You’ve trusted Mamavation with topics like safest cookware, best and worst organic milk, & safest small kitchen appliances, now join us as we take you through the issues behind glyphosate, how it could be impacting your family, and what you can do today to protect them.

Disclosure: This post is sponsored by MegaFood. All opinions expressed in this post are from Leah Segedie. In May, MegaFood is partnering with Leah Segedie to lead a rally and march more than 70,000 petition signatures to the office of the Environmental Protection Agency (EPA) in Washington, D.C. compelling them to end the practice of desiccation using glyphosate. Wish us good luck!

Federal Agency Toxic Substances and Disease Registry (ATSDR) Releases Much Anticipated Report About Monsanto’s Herbicide Glyphosate Saying It’s Toxic and Could Be Causing Disease In Millions of Americans. However, No One Is Surprised By The Findings Or The Fact That Monsanto Tried to Squash It.

The public health agency of the U.S. Department of Health and Human Services (DHHS) Agency for Toxic Substances and Disease Registry (ATSDR) released a much-anticipated report on the toxicity of glyphosate. In 257 pages they concluded that not only is glyphosate linked to cancer, but also diseases regarding reproduction, development, and organ toxicity. Researchers independent of this report have also linked glyphosate to spreading antibiotic resistance, poor gut health, liver enzyme disruption, and gluten intolerance.

Basically, this chemical is a nightmare.

And this isn’t a surprise. In 2015, the World Health Organization’s office of International Agency for Research on Cancer (IARC) determined that glyphosate is “probably carcinogenic to humans.” The State of California took note. In 2017, they added glyphosate to California’s Proposition 65 list of chemicals known to cause cancer with the California Environmental Protection Agency’s Office of Environmental Health Hazard Assessment (OEHHA).

Then thousands of lawsuits ensued.

The most interesting part of this report is not its findings, but the efforts that were taken behind the scenes to squash it. According to internal Monsanto emails recently made public through litigation, Monsanto attempted to squash this report using close allies at the EPA. In April of 2015, now retired EPA Pesticide Office official, Jess Rowland, tried to bury the ATSDR report on Monsanto’s behalf. Saying to Monsanto’s Dan Jenkins that “If I can kill this I should get a medal.”

Jess did not succeed in killing the report, but he did make sure that it was put on the back burner for several years.

What is Glyphosate And Why Is It Showing Up In Elevated Levels in Foods Like Oatmeal, Cereals & Protein Shakes. The Pesticide Industry Is Hoping Your Eyes Gloss Over When You Hear the Word “Desiccation,” But Don’t. It’s Important.

Glyphosate is the world’s most popular herbicide sprayed on over 200 types of crops & backyards all over the US. It’s used to kill weeds for farmers and inside household products like Roundup Weed Killer. Glyphosate works by inhibiting an enzyme found in plant life that is needed to survive. It’s a broad-spectrum antibiotic and mineral chelator that immobilizes nutrients and kills microbial life in the soil. This chemical is typically sprayed on genetically modified crops as well.

Recent tests from the Environmental Working Group (EWG) found glyphosate in popular oat-based foods at levels up to 8 times higher than what our scientists consider safe. Brands like Cheerios, Quaker Oats, & Lucky Charms had unsafe levels of glyphosate. But how does that much glyphosate get into oats, wheat, and legumes? A farming practice known as “desiccation” is suspected to be the culprit behind why these foods, in particular, are coming up with such high levels of glyphosate.

The practice of desiccation is an affront on public health because it increases exposure to a dangerous pesticide. Desiccation is where the farmer dries out his field before harvest by spraying the crops with glyphosate, leaving more glyphosate residue in the crop. This is believed to be one of the reasons why processed food containing wheat, oats & legumes consistently have higher levels of glyphosate. It increases the amount of glyphosate on the plant, and by the time the consumer eats, it’s still present in higher amounts.

When seeing rates of glyphosate spike in the United States by farmers, instead of curbing this dangerous practice, the Environmental Protection Agency (EPA) allowed Big Ag companies to spray 300 times more glyphosate on oats and other grains compared to what was legal in 1993.

Court Cases Reveal Monsanto Suppressed Evidence of Harm About Glyphosate, Harassed Independent Scientists, and Was Found Guilty of Causing an Oakland Janitor’s Non-Hodgekins Lymphoma. The Original Judgement Was Over $250 Million.

Monsanto (recently acquired by Bayer) has over 11,000 pending court cases all stating that Monsanto’s glyphosate caused their non-Hodgkin’s lymphoma. The first trial was tried by Bret Wisner pictured in the video above and an Oakland Janitor named Dewayne Lee Johnson who sprayed Roundup on school grounds and is dying of non-Hodgkin’s Lymphoma. Dewayne said he took all the precautions prescribed on the bottle and still got sick. The court case not only proved that Monsanto had known about the dangers of the chemical, but they ghostwrote “independent” studies, & actively fought to keep it secret by attacking scientists critical of them. Monsanto was originally fined $289 MILLION and that judgment was later reduced to $78 MILLION.

A second court was brought by Edwin Hardeman and was awarded $80 MILLION. With over 11,000 additional cases to try, Bayer’s stock prices have taken a tumble and insurance evaluators are suggesting their liability may bankrupt them.

Want to End Desiccation of Glyphosate? Join MegaFood & Over 70,000 in Demanding the Environmental Protection Agency (EPA) Stop the Practice of Desiccation to Protect the Public

MegaFood believes glyphosate shouldn’t be anywhere near our food. To protect the public, they are leading the charge along with the Environmental Working Group (EWG), Ben & Jerry’s, Mom’s Organic Market, Stonyfield Farm, Nature’s Path Foods, and Natural Grocers to ban glyphosate by calling on the U.S. Environmental Protection Agency (EPA) to protect our families and our food.

Join thousands of other people signing this petition demanding that the EPA end the practice of desiccation immediately!

On May 23rd We Deliver 70,000+ Signatures to the Environmental Protection Agency. Will You Support Our Efforts?

On May 23rd, I’m going to lead a rally at Freedom Plaza in Washington, D.C., a few blocks from the Environmental Protection Agency (EPA), to help end the use of glyphosate as a desiccant on crops. Special speakers include myself, Sara Newmark, VP of Social Impact for MegaFood, Gary Hirshberg, the former CEO of Stonyfield, and others. Stay tuned for more details.

Come join us and stand for change. We can no longer stand by and allow these corporations and billionaires to increase the amount of dangerous chemicals we are exposed to, manipulate the system, and put families, farmers and farm workers into additional danger. Now is the time to demand the practice of desiccation no longer endangers my family and yours. Sign the petition here.

Every Day Is Earth Day. Educate Yourself On Regenerative Agriculture!

We no longer have the privilege of only celebrating Earth Day on April 22nd every year, because every day needs to be Earth Day. So I wanted to also highlight Regenerative Agriculture and the importance MegaFood places on it. Many of us aren’t aware that our planet, our home, has less than 60 harvests left until there won’t be any more topsoil to grow food. The health of our soil has dwindled due to over-tilling and chemical use. Regenerative agriculture may help reverse climate change by rebuilding the soil and organic matter while also restoring degraded soil diversity. MegaFood is committed to ensuring our future is healthy and sustainable by partnering with trusted farmers who support organic and regenerative agriculture.

Offering an entirely glyphosate-free product line, and sourcing whole food ingredients from like-minded farmers, MegaFood is choosing to take a stand for soil health and in turn, provide more for our planet and population. Join MegaFood and Mamavation by making a stand against glyphosate and spreading the word.

Who’s Energizing Me? All MegaFood Products are Certified Glyphosate Residue Free and They Care Enough to Pressure the EPA For Us. Let’s Give Back By Voting With Our Dollar!

Your wallet is the most powerful vote you have, so use it wisely! This brand is putting their money where their mouth is and fighting for change in Washington, D.C–something that impacts all of us. Plus, I love how their products make me feel. MegaFood is an award-winning dietary supplement brand dedicated to changing the world and providing for a healthy, sustainable future by crafting premium vitamins and supplements made with real food from trusted family partners. They are also certified by The Detox Project to be “Glyphosate-Residue Free” proving they are incredibly clean. I’ve been a fan of MegaFood for over five years and use their supplements as a tool to accomplish the active lifestyle that I lead. Here are some of my favorite products to help with energy…you know the kind you need raising three young boys, managing a successful business, and trying to stay afloat. I’ve linked them up to Amazon in case you would like to take a look.

Additionally, check out these 5 tips from MegaFood on how to avoid glyphosate at your breakfast table!

*This statement has not been evaluated by the Food and Drug Administration. This product is not intended to diagnose, treat, cure or prevent any disease. 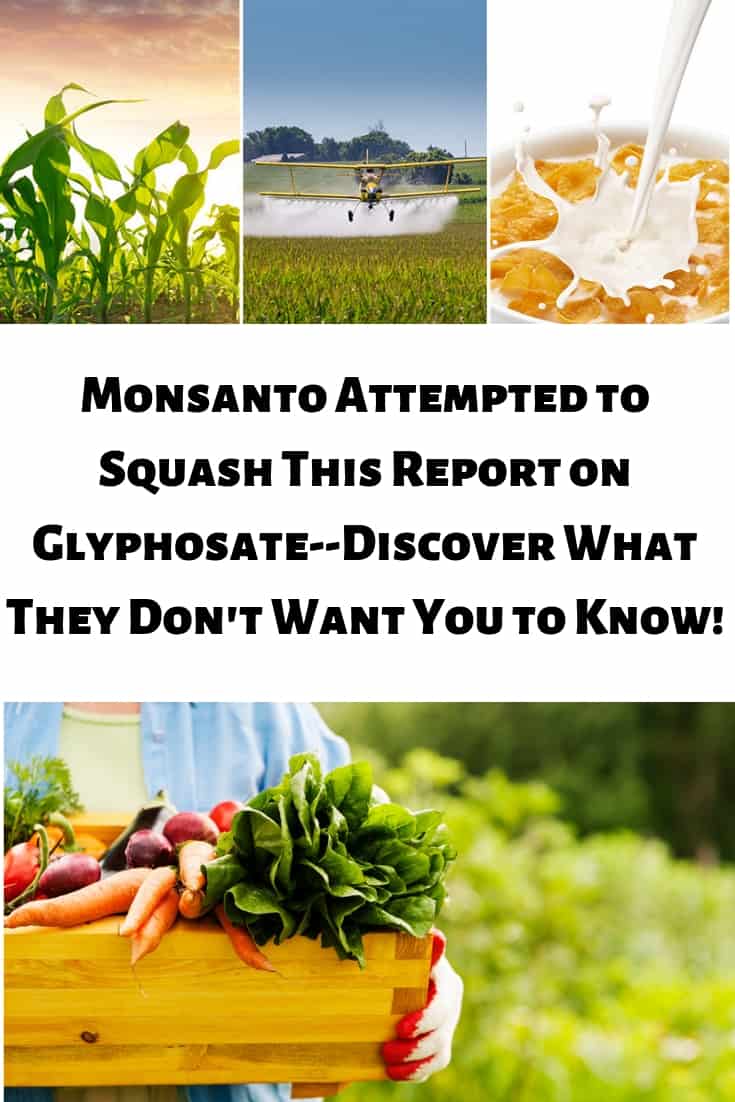