Recent independent studies have demonstrated that fluoride may be more dangerous than it is useful when it comes to children. While living a toxic-free life, many parents are aware of the debate over fluoride, one of many possible toxins that can be found in our tap water. Long touted as the safest way to prevent cavities and tooth decay, fluoride poisoning is starting to become a big problem for kids since fluoride has made its way from being an element of most toothpaste brands to inclusion in our drinking water supplies.

The question is: Is this much fluoride safe for our children? And if it’s not, what steps can a family take to avoid it?

The Facts on the Safety of Fluoride

Let’s take a look at what science has to say about the safety of fluoride. It hasn’t been on steady ground recently, but in the past it seemed like an obvious solution no one really took the time to explore in detail. Did anyone mistakenly jump to the conclusion that it was the best thing since sliced bread without actually doing the studies? Well, it seems that way. Fluoride was widely recommended by dentists and the American Dental Association in addition to several other physician and public health organizations. But where does the evidence of fluoride safety come from? Well, much of the data does date back to a survey from the 1940s, although some research has been done more recently.

The World Health Organization (WHO) strongly supports fluoride to prevent cavities, as recently as 2016. They use surveys of people living in fluoridated water districts. Surveys are NOT as good as randomized clinical trials, the gold standard of research, and have not yet been done. WHO believes such trials could be beneficial.

Additionally, a January 2015 study done in New Zealand shows no significant link between public water fluoridation and IQs. However, a 2000 review of available studies done by University of York concluded, “little high quality research has been undertaken.” They recommended studies be done with more “appropriate methodology.” In other words, there was not enough information to recommend the safety and widespread water fluoridation. And if we don’t have enough information to douse everyone’s water with fluoride, then why has that been done nationwide?

And in 2011, Proposition 65’s Carcinogen Identification Committee (CIC) determined that fluoride and its salts have not been shown to cause cancer…at least, thus far.

This may be confusing, but it gets better.

Is fluoride chemically toxic? The FDA claims that it’s safe to fluoridate bottled water as long as it’s “no more than 0.7 milligrams per liter (mg/L).” However, fluoride can accumulate in the body, making the total a child is getting questionable.

Additionally, more studies are showing evidence that fluoride may have a negative impact on the developing brains of children. Because of this, in 2010 the American Dental Association recommended that fluoride supplements ONLY be supplied when a child is at high risk of developing cavities. You can no longer buy the supplements unless you have a prescription. Those are usually only available when there is a high possibility of fluoride deficiency.

Did your child’s dentist recommend fluoride treatments recently? That may not have been the safest route to them to go. And it’s possible that your dentist may not have recently reviewed the latest recommendation from the American Dental Association. Because most water districts are using fluoride, prescribing fluoride has gotten trickier.

Here is a list of the most recent studies demonstrating fluoride may be more harmful than useful:

July 2012: Researchers from Harvard School of Public Health (HSPH) and China Medical University in Shenyang reviewed 27 studies in combination and found “strong indications that fluoride may adversely affect cognitive development in children.” This was the first time a comprehensive review was done combination.

January 2015: A follow up study was done assessing fluoride levels in 51 first graders in China, and found a correlation between lower IQ points associated with higher levels of fluoride.

June, 2015: A comprehensive evaluation of existing data done by the Cochrane Oral Health Group showed that there was insufficient data to declare the safety of fluoride and also showed an association between dental fluorosis (fluoride poisoning) and fluoride levels.

August 2016: A New Zealand study showed virtually no difference in the number of cavities in children who had fluoridated water versus those who did not.

September 2017: This study, done in Mexico, showed that “increased levels of prenatal fluoride exposure may be associated with lower cognitive function in children.” They noticed that for every 0.5 milligrams-per-liter increase in fluoride (above 0.8 milligrams) IQ scores dropped.

In other words, levels above U.S. recommendations for water may be decreasing those IQ points of children. Finally, even Medscape admits that poisoning can happen from ingesting even a little fluoride – 2 grams for adults, and 16 mg/kg in kids, although the estimated lethal dose is much higher. Very few people are getting a lethal dose. But for most parents, the idea that fluoride could potentially be affecting the IQ points of their children is enough to warrant avoidance.

Let’s talk about fluoride poisoning and what it looks like. Before we get to symptoms, there are a few more facts you should know about this neurotoxin: 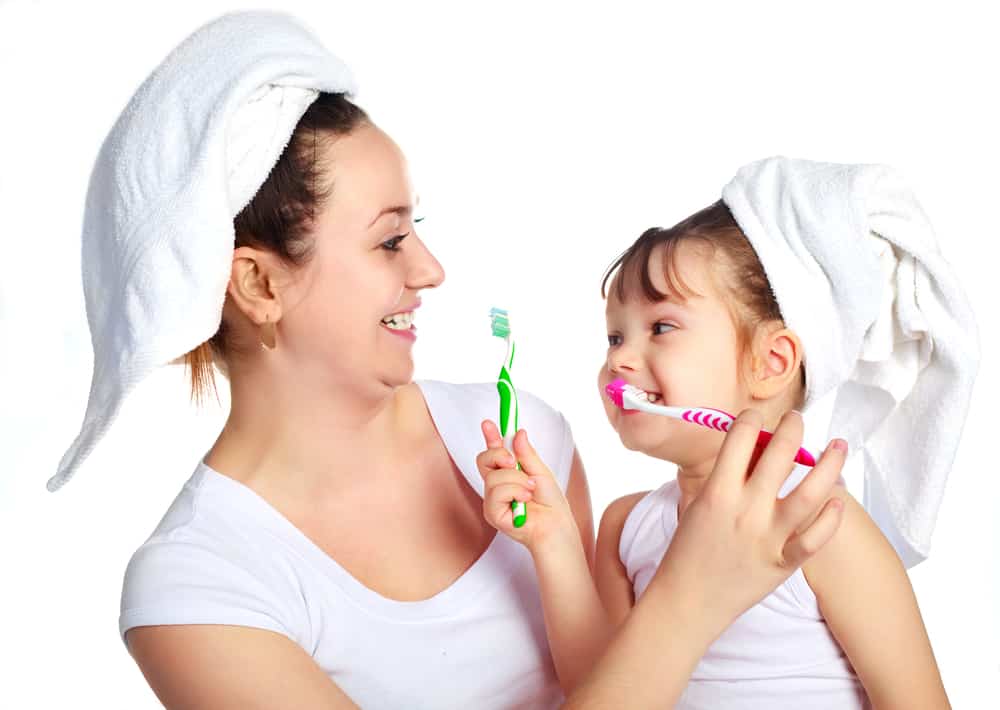 How do you know if your child has fluoride poisoning? The Symptoms listed by HealthHype.com include:

According to WebMD, most cases of fluorosis are mild and therefore, no treatment is done or if it’s worse, teeth are whitened. They claim there’s not much harm in fluoride poisoning. They conveniently don’t mention skeletal fluorosis, a known bone and joint disease caused by ingesting too much fluoride.

However, because most currently existing research is not rigorous, questions and differences of opinion over the dangers of fluoride as well as it’s safety and efficacy in our water and bodies, remain. Fluoride Action Network links fluoride toxicity to arthritis, bone fraction, gastrointestinal issues, hypersensitivity, kidney disease, endocrine disruptions, thyroid disease and much more.

As long as the recommendations keep changing and the “safe” limit keeps dropping, we may never be sure of the full range of problems caused by fluoride poisoning unless more testing is done.

Here is a list of products that contain fluoride.

There has been much debate about whether or not high quality organic kombucha is safe from fluoride contamination. Weston A. Price Foundation ran its own tests to discover if tea and kombucha contained high levels of fluoride. They concluded that “the levels in the tea were only slightly higher than those in the filtered water from which it was made and actually slightly lower in the kombucha than in the black tea. (The water was filtered from fluoride.) These results suggest that the process of fermentation actually removes some of the fluoride from the tea…” According to their testing in filtered water, black tea had 0.94 parts per million (ppm) of fluoride, while kombucha had 0.90 ppm.

There are groups that disagree with that result because tea leaves can absorb fluoride from the soil. In fact, a 2010 study showed that tea had more fluoride than previously thought. It was studied using ionized water, which contains no fluoride. The noticed the longer you steep it, the more minerals can creep into your tea.

The researchers also used a special method to detect fluoride on a chemical level that is not commonly used to detect fluoride levels on such a tiny scale. That said, the study was inspired by patients with skeletal fluorosis, who drank gallons of tea daily for a decade or more.

Like all things, perhaps you should enjoy your kombucha in moderation, and start detoxing your home from fluoride. And when you do buy tea or kombucha, always use a high quality, certified organic brand that uses filtered water to steep.

How Safe Is Your Water?

So the question is: is your water fluoridated? The answer is most likely “yes.” By 2014, the Center for Disease Control reported that nearly 75% of all community water systems in the U.S. were fluoridated.  If you are wondering about your current water safety or fluoridation, here are some resources you can check:

How to Avoid Fluoride Poisoning and Have Healthy Teeth

Most cavities are caused by sugar. Given the high sugar content of the standard American diet, it’s no surprise that kids in this country are overwhelmed with cavities. You can protect your tween or teen from that high risk of fluoride poisoning by maintaining healthy teeth, without the fluoride. Here’s how:

How to Remove Fluoride From Your Drinking Water & Final Tips

The dangers of fluoride continue to be debated but one thing is certain: Far too much of it can be harmful. If you have fluoridated water, you might want to make changes to safeguard your family. In the meantime, we’ll keep an eye out for the evolving science on this potentially toxic chemical.