What’s in school chicken nuggets? Apparently that can be a hard question to answer. It took a Freedom of Information Act to get a Chicago school district to answer “chicken nuggets.” After some more pressing, the school district came back with an incomplete 28 ingredient list. It took some serious work, but our Mamavation founder was able to get ingredient lists for some of the items served at her son’s school. I’ve already detailed the 64 ingredient chicken sandwich, but now I’m taking a closer look at this cafeteria favorite,  school chicken nuggets. 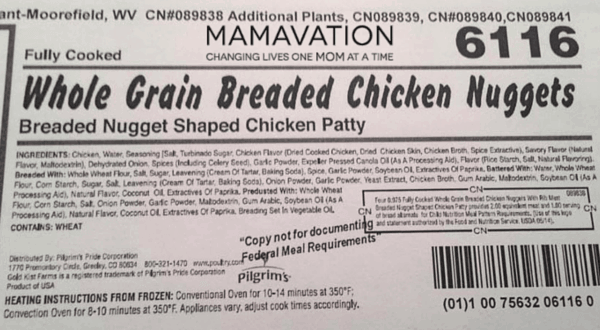 As I dissected the ingredients of these school chicken nuggets, I found the highly processed frozen food to contain a number of undesirable components. Here’s what I found:

In this case, first comes chicken– conventional chicken. It’s routine for antibiotics to be injected into chickens, whether they are ill or not. In fact, 80% of all antibiotics used in the U.S. are given to livestock, not people. Excessive use of antibiotics is creating bacteria that’s resistant to treatment with antibiotics. New research shows the antibiotic resistant bacteriophages can be transferred to humans in chicken meat. Recently a video went viral showing chickens being injected with something else. It turned out to be broth or salt water in order to produce a plumper final product. As much as 30% of the chicken’s weight can be attributed to this plumping process. The issue here is primarily with sodium. A usually low sodium food, such as plain chicken, can jump to 400mg with the addition of injected liquid.

There are a number of concerns when it comes to cooking with these oils. They are processed at very high temperatures and toxic chemicals and solvents are added in the production. Unlike olive oils or coconut oil, vegetable oils are high in Omega-6 fatty acids. Although our body needs Omega fatty acids, it’s imperative there’s a balance between both Omega-6 and Omega-3 fatty acids in the body. Increased consumption of vegetable oils has caused this balance to get out of whack. Excess levels of Omega-6s are linked to cardiovascular disease, arthritis, and even cancer. In addition, these oils are likely produced from genetically modified crops, which is the next cause for concern in these school  chicken nuggets.

Corn and soy are two of the most common genetically modified crops. GMO crops were designed to be either pesticide resistant or herbicide resistant, which means bugs and weeds die, but not the plant. Most are treated with toxic herbicides, such as glyphosate. The World Health Organization recently declared glyphosate as probably carcinogenic. And there are several other reasons why you want to avoid glyphosate for the health of your family. The abundant use of glyphosate is leaving residue on the foods we eat and is even running into ground water. If you are curious how much glyphosate is inside your loved ones you can pay for testing here.

In this particular product of school chicken nuggets I found 14 ingredients that likely to contain GMOs. It can be hard to spot what foods contain GMOs because they are not currently labeled in the U.S. You can see over 100 places GMOs may be hiding on this list. It’s important to note that although animals are not genetically modified, their feed is. This means animal products are contaminated with GMOs, unless they are identified as organic or GMO free.

Even though MSG (Monosodium Glutamate) wasn’t directly listed on the ingredients list, it is still likely present. MSG overstimulates brain cells which can lead to serious issues, such as brain damage, tumors, learning disorders and behavioral issues. It’s not something we want to be feeding school children. I was able to find MSG likely hidden in these 9 ingredients:

If you weren’t keeping track, that’s 18 separate ingredients in the school chicken nuggets that are cause for concern. So what’s the alternative? If you’re ready to avoid school lunches like the plague, then opt for a packed lunch from home. You can find some easy school lunch recipes and ideas here. It’s also worth having a conversation with your school’s nutrition director for a list of ingredients of what’s in the food being served to your children. It may be beneficial to talk to your child’s school about a real foods lunch option, such as Revolution Foods. They’re working to provide chef created affordable food to schools.[/fusion_builder_column][/fusion_builder_row][/fusion_builder_container]