We’ve been warning you about pesticides WAY before it became popular. And that’s because the hormonal impact on your body when exposed to certain pesticides is concerning, especially if you are pregnant or have young children. But most brands are not open to sharing their pesticide data and we think that needs to start changing. And to show you that it’s possible, we want to introduce you to Zego, one of our favorite brands. Zego publically shares their pesticide data and want to disrupt the market so that other brands start sharing too. Would you like to learn more about them? You’ve trusted Mamavation to bring you topics like best & worst organic milk, 13 foods you don’t need to buy organic, & safer pest control, now join us as we celebrate Zego and their decision to make their pesticide data public.

Disclosure: This post is sponsored by Zego. We are super proud of what they are doing and wanted to support their efforts.

Glyphosate is Problematic in Cereals & Grains

Processed foods have a pesticide problem, especially when it comes to grains & cereals. But grains are part of our lives. We don’t want to stop eating our granola & protein bars. We just want them without pesticides and contaminants. Is that too much to ask? The problem is the herbicide glyphosate has been consistently coming up in large quantities in oats, wheat & legumes of processed foods, including some organic brands. Oats & wheat are a focal point of the controversial farming practice called desiccation. This is where the farmer dries out his field before harvest by spraying the crops with glyphosate, leaving more glyphosate residue in the crop. This is believed to be one of the reasons why processed food containing wheat and oats consistently have higher levels of glyphosate. 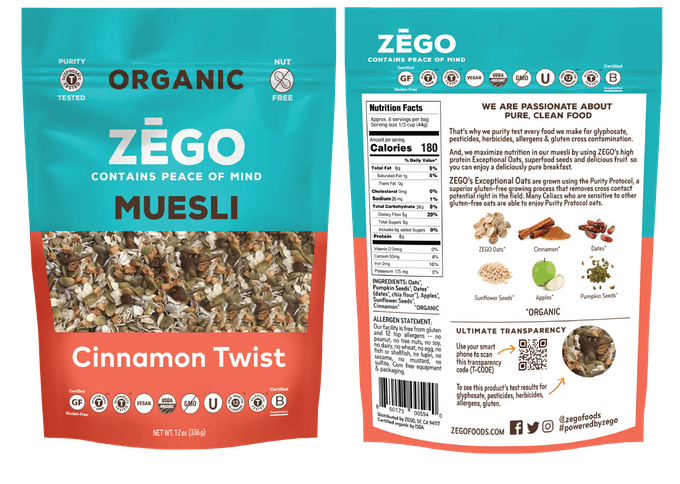 NewsFlash: The Organic Industry Isn’t Perfect–Fraud on the Horizon

The American organic grain trade has recently been infiltrated by eastern European cartels, who took advantage of the USDA’s lax enforcement policies. According to a report produced by watchdog organization Cornucopia, the USDA fell victim to the European Union clamping down on organic inspections. This shifted the weight of fraudulent organic shipments from former Soviet Bloc countries including Ukraine, Kazakhstan, Romania, and Russia to the United States and they passed inspections. Organic corn, soybeans, and other commodities were part of the shipments. Most of these crops likely went to feeding organic animals, however, they also contaminated some of our dinner plates in processed foods. Could this be part of the reason why some organic brands are testing positive for glyphosate? Possibly. Millions of pounds of shipments of fraudulently organic food is something the USDA needs to do something about.

Solution: Be Transparent. Zego Shares Pesticide Testing and Challenges Other Brands to Do The Same.

Colleen, the founder of Zego, has been testing her products for years. We interviewed her several years ago for a piece we did on pesticide residue and found out that certain organic spices she was testing for purity were coming up positive for the herbicide glyphosate. She mentioned in the conversation that it was her wish for testing to be part of how brands presented themselves. Today is the first step to her making that dream of transparency become a reality. And she’s done it with the launch of new products.

Zego has launched a brand new product line of oats, muesli, & protein powder on Kickstarter. Each new product from her line has a pesticide report document that shows the levels of pesticides. Here is an example of what you will see when Zego shares their pesticide data.

If you support Zego TODAY, you’ll not only get food that is free from pesticide residue, but you’ll also help them expand their business and keep pressuring the industry. Because really, we need renegades in this world to pressure others into doing the right thing and Zego is that brand! Pledges and packages start at $3 and go all the way up to $500 for those of you who really want to make sure this idea of transparency succeeds.

Here are the Kickstarter levels of support you can get involved with:

Problematic Pesticides You Want to Avoid

Pesticides are problematic, but Zego is testing or over 400 pesticides and sharing that information with you. But here is a list of some pesticides you really want to avoid.

Here’s a list of 400+ pesticides that Zego is testing for and making public for you to see on all their new products.

And this is why we are such fans of organic food because the pesticides that we are concerned with are not used by organic farmers. But to be pragmatic, we support organizations and companies who are working on the issue of transparency in the industry. Zego is an example of a brand that I want to support, not only because their products taste great, but also because they are doing something I believe in. If you are looking for organic oats, protein bars, protein powder & museli, check out Zego Foods.

Could Folic Acid Be Making You Sick? MTHFR & The Genetic Road to Happiness
Next Post: Organic Infant Formula: How Mamavation Changed The Law & Investigation