After two years of direct activism by Mamavtion and others, Target has quietly banned bisphenols like BPA and BPS from their thermal receipt paper making your family safer starting in 2021. And there’s more good news to share so stick around! You’ve trusted Mamavation to bring you topics like best & worst cookware, best & worst collagen, & best & worst probiotics, now join us as we bring you incredible news–Target is banning bisphenols from receipts and more surprises!

Two years ago, the Mamavation community led by Leah Segedie, launched a petition demanding Target ban the use of bisphenols in their thermal receipt paper to safeguard customers and workers from exposure. Over 51,000 signatures were gathered from the Mamavation community, which led to meetings with Target to discuss how dangerous bisphenols were to the hormonal health of Americans, especially young girls and pregnant women.

We met with Target alongside the Mind the Store Campaign & Green America to explain to them that Target shoppers are needlessly being exposed to high amounts of Bisphenol-S (BPS) in their receipt paper when they are handled, yet safer alternatives are available.

We didn’t get what we wanted right away, and we were getting ready to start more petitions when Target quietly changed their mind and announced the change in their 2020 corporate responsibility report which they just recently published.

The idea for this petition came about under the advisement of Pete Myers–our scientific advisor &  best-selling author of Our Stolen Future, and founder of Environmental Health News.

Pete has been studying bisphenols (like BPA & BPS) and their health impacts for decades. He made it very clear to us that the vast majority of Americans were exposed to bisphenols through the handling of thermal receipt paper. The exposure from thermal receipt paper is far more prevalent than exposure you get through can linings or drinking water from plastic.

Therefore, getting a big brand to take a leadership position in the marketplace and ban bisphenols would greatly benefit public health.

Today he celebrates with us!

“What we know from research by BPA experts is that thermal receipt papers… those seemingly innocuous part of our everyday lives, from ATM machines, gas station pumps, airline tickets, are probably the biggest source of BPA exposure most Americans experience” says Pete Myers. “This move by Target is incredibly important for the health of Americans. Thank you, Target.”

The News Gets Even Better! CVS is Also Banning BPA & BPS in Thermal Receipt Paper!!

As Mamavation was working on Target, Green America petitioned CVS about their infamously looooooooooooooooong receipts as well. We supported their efforts by sending Mamavation community members to sign their petition.

And behind the scenes, the Mind the Store Campaign has been engaging with both Target & CVS (and many other retailers) for many years as they have evaluated their chemical policies and made suggestions on how to better safeguard families. Every year they produce an annual Mind the Store report looking at the top retailers and evaluating them for safer practices.

Now that both Target (starting 2021) and CVS (they completed their phase-out this year) have removed bisphenols from their thermal receipt paper, it’s my understanding they will receive additional good marks on their Mind the Store report card next year. Kudos to them!

What Are the Health Impacts of Bisphenols like BPA or BPS?

Bisphenols can leave your body a bit of a mess. Experimental data suggests BPA can affect a variety of endocrine signaling pathways, including those mediated by oestrogens (estrogen), androgens (testosterone), progestins, and thyroid hormone.

Pete points to scientific findings of BPA from many different sources, but especially the FDA’s own data.  He says that if you look at the FDA’s current assessment of BPA safety, to truly be safe you would have to reduce exposures by at least 20,000-fold.  The FDA is simply not doing its job for American chemical safety. They are leaving the public out to dry–or wrivel–, because they are protecting the interests of the chemical industry, not American consumers.

Exposure during pregnancy is the most dangerous where bisphenol exposure has been linked to changes in a wide array of developing tissues, with corresponding postnatal effects on growth, metabolism, behavior, fertility, and cancer risk. In other words, what happens in utero can come back to bite you again outside the womb and then decades later with developing cancers.

BPA is also the first hormone-disrupting chemical to be directly studied in a medically classic randomized controlled experiment in humans, which will likely be followed up by more studies in the coming years. But the first study done directly on humans linked low levels of bisphenol-A to raising diabetic insulin responses.

Additional health impacts linked to bisphenols chemicals are below.

Thermal receipt paper is used by the vast majority of retailers in the United States, so this is an ongoing exposure for most people that other retailers need to improve on.

The problem with this exposure is it’s rather significant. Unlike when you handle cans and bottles that are lined with BPA/BPS where that chemical is “bounded” within the plastic and that means the molecules must break down in order for a person to be exposed to the chemical. When it comes to thermal receipt paper, the BPA/BPS is present in the loose powder, which leaves a chemical trace on your fingers very easily. Therefore, the contamination is higher in thermal receipt paper than it is with bottles and cans.

How Much Exposure Do Shoppers & Workers Get From Handling Thermal Receipts?

According to Finnish studies, people can expect to have between 0.8–18.9 ppm of bisphenols coming out of their urine when handling thermal receipt paper. The bisphenol powder on the receipt transfers to your skin, especially if your fingers are wet or greasy.

Levels of bisphenols increase inside the human body during specific situations:

However, throw all this out the window because researchers have recently discovered that the amount of BPA being absorbed into our bodies is quite higher than originally thought.  That’s because the methods being used this entire time were found to be faulty. Now experts are saying we are getting more BPA and other bisphenols than what the Feds are telling us. 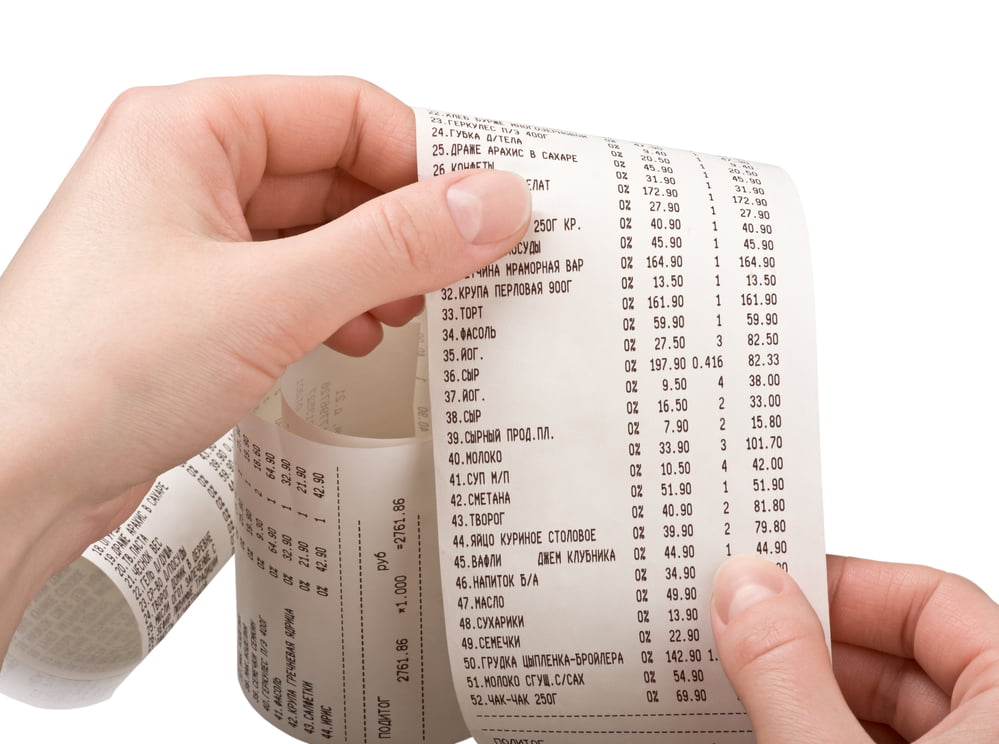 Other Brands That Have Safer Receipts

There are other national brands that have tackled this issue and are already offering you a safer experience in their store with no bisphenols in their thermal receipt paper.

Let’s hope this is just the beginning, these market leaders get some more attention, and more brands in the future follow suit.

EcoCenter.org tested the thermal receipt paper in 2018 of over 150 stores to ascertain which nationwide stores were exposing their customers to toxic bisphenols–BPA or BPS. Here is a list of the most recognizable brands analyzed:

What Alternatives Do Other Brands Have?

Brands are frequently reading the research we do here at Mamavation so we wanted to help some of them out with options that are available to them. There are tons of viable options available.

In Green America’s Skip the Slip report they estimated “if just one company as large as Walgreens – with nearly six million customers every day – ends its use of paper receipts, over 55,000 trees will be saved each year…This change would save 58.8 millions of gallons of water and keep 17.6 million pounds of CO2 from entering the atmosphere.”

So here are some of those options: