Just when young girls start getting interested in makeup, studies have found hormone-disrupting chemicals inside everyday cosmetics are linked to early puberty. So if you are pregnant and don’t want your children to suffer the physical, socio-economic and emotional impacts of having puberty come early, pay attention, because this study was created by following exposure from utero. Could this be impacting your family? Possibly. But never fear, Mamavation will break it down for you and give you ideas on better brands and DIY recipes you can try at home to solve this problem. You’ve trusted Mamavation to bring you topics like simple steps to avoiding dangerous personal care products, which shampoo & conditioner brands to avoid and buy, & safest sunscreens on the market, now join us as we take you through the study that links cosmetic chemicals to early puberty.

Adolescence is not the same as puberty, so let’s clear that up right away. Adolescence is a ten to twelve year period when your children start becoming more independent of their parents. It starts in late grade school or early junior high and lasts till they are in their twenties. Puberty lasts for about one to three years and it’s a process by which your hormones change you into a mature sexual being. Girls usually go through puberty about a year before boys. But not anymore. It’s happening far earlier, whereas nine years old isn’t so odd anymore.

Early puberty is incredibly problematic for families because there is a trend of young girls developing at nine years old based on environmental hazard exposures in utero, childhood, and adolescence. And when girls go through early puberty, they are more likely to suffer from mental health problems. There are also other links to higher pregnancy rates, higher high school drop out rates, and lower test scores. Early maturers are also more likely to report psychosomatic symptoms such as abdominal pain, sleep disturbances, headache, upset stomach, breathlessness, tremors, and heart palpitations.  They are also more likely to suffer from eating disorders, anxiety, panic attacks, & depression.

There are chemicals in commerce that are linked with early puberty in girls inside personal care products, so if you are pregnant or have young children, pay attention. These chemicals include phthalates, bisphenols, triclosan & parabens.

You may have noticed that some of these chemicals are not on the label and that is part of the problem. When it comes to phthalates and bisphenols, you may never know they are there.

Phthalates are typically added to synthetic fragrances to keep the odor around longer and is an endocrine-disrupting chemical. But because of lobbying efforts, they are not labeled on the bottle. The only way to tell is by looking for the word “fragrance.” Fragrance is a legal loophole that has the ability to contain thousands of ingredients covered up by one word. Companies have been arguing for years that it protects them from having others copy their formulations. But in a word where labs can now reverse engineer ingredients, that’s no longer the case. No one is protected from a competitor stealing their formulations, so why do we still have this law? Will this ever be changed? We hope so! But until then, avoid anything with the word “fragrance.”

Bisphenols are found in plastic packaging and containers and is an endocrine-disrupting chemical. There is no federal mandate telling companies to disclose them being next to or adjacent to the ingredients. Bispenols have the ability to leach out of the container into your personal care products when they are in contact with heat, fat or acid, which is commonplace in the production and formulations of personal care products. What this really means is the personal care industry needs to start paying attention to what type of plastic they are using and avoid #7 with bisphenols.

Triclosan is a bioaccumulating antibacterial chemical & environmentally persistent endocrine disruptor, meaning it’s designed to kill bacteria & absorbs at a faster rate than it’s excreted from an organism. That’s part of the reason the FDA banned the use of triclosan in hand soap. The chemical was previously in antibacterial soaps, but the FDA found that there was no benefit in using anti-bacterial soap over regular soap and water. When it comes to triclosan, pay close attention to your toothpaste because some of the most popular brands, like Crest, have them.

Parabens are harsh preservatives and endocrine-disrupting chemicals that mimic estrogen in the body. They are used in things like shampoos, conditioners, lotions, facial cleansers, shower gels, and scrubs, as well as cosmetics, feminine care wipes, and feminine washes. Parabens discourage the growth of microbes so they are found in things that contain water or aloe vera.

Researchers followed 338 children from birth till they were in adolescence to ascertain whether certain chemicals linked to early puberty were problematic. Most of these women were latina and below the federal poverty line. They tested the mother’s urine for the contaminants during pregnancy in order to understand how much of these chemicals they were consuming. They also interviewed the women on lifestyle decision they were making that would lead to contamination. They then followed up with the children when they turned 9 years old and examined the girls for puberty development every 9 months until they were 13 years old.

They found that for every doubling of the mother’s urine concentration of triclosan, the girls started menstruating at least one month earlier. Then for every doubling of phthalates in mother’s urine, their daughters developed pubic hair about 1.3 months earlier. And half of the girls in the study started growing pubic hair at 9.2 years old and then started menstruating at just 10.3 years old.

As expected, boys puberty timing wasn’t impacted as all because these chemicals impact estrogen and not testosterone. The study was funded by the National Institute of Environmental Health Sciences and the US Environmental Protection Agency. 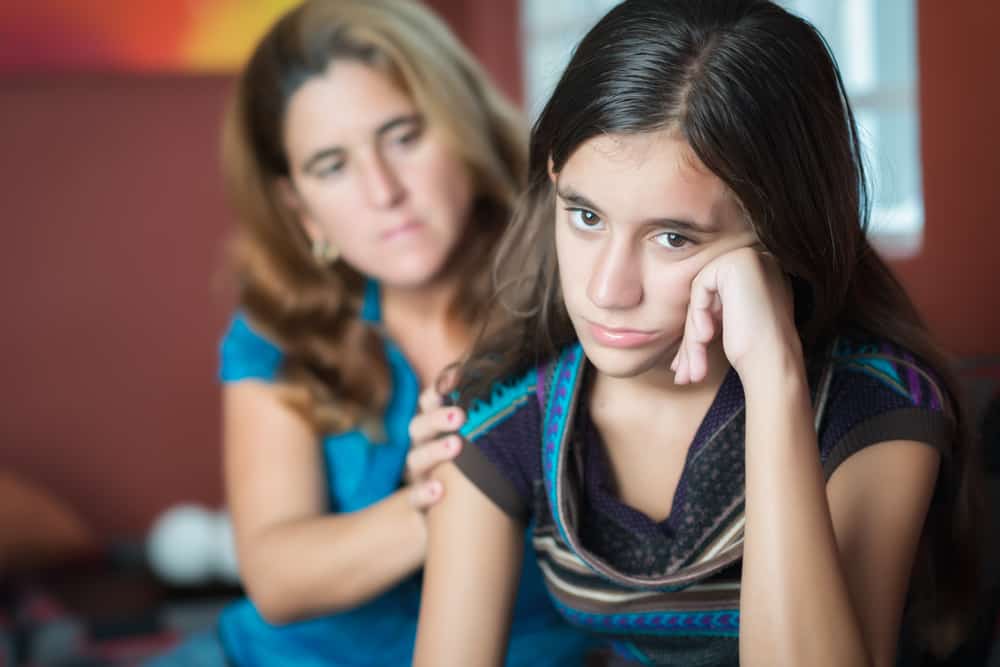 Choose This Not That

And there is also good news! Yes, it’s bad, but there are better options out there. Break the mold ladies! “The fact that we find associations with earlier puberty in girls is additionally concerning,” Harley said. “The good news is, that if women want to reduce their exposure to these chemicals, there are steps they can take.” And Mamavation can help you with all that!

In fact, in the book Green Enough: Eat Better, Live Cleaner, Be Happier (All Without Driving Your Family Crazy!), we called out all the brands. So to make things simple on you today, we’ve recommended some brands that are already safe, effective, and available on Amazon. We’ve also linked up some Beautycounter products available on Amazon, however, if you go to your local Beautycounter Rep, they will be less, so ask around. The Beautycounter ladies double also as local activists so I love supporting them.

At the end of the day, the only way to avoid these contaminants completely is to make them yourself. And the added bonus is making your own DIY formulations means you’ll also save a ton of cash as well. Natural products can be pricey so if you don’t mind doing the work yourself, you’ll save money and have healthier products. Mamavation has got your back. Here are some natural DIY recipes you can make at home.

Let us know what you decide to do with your personal care product regime? Are you making things or are you just switching up what you buy? Regardless of this decision, you’ll definitely be dulling down on the amount of hormone-disrupting chemicals you have inside your body at any given time.

Do You Have an Iodine Deficiency? These 7 Symptoms May Give Your a Clue
Next Post: Try These 10 Waste-Free Products to Simplify Your Life & Go Plastic-Free