Winter is here and it’s the perfect time to serve your family a warm and healthy soup. But making soup for the whole family can seem like a big hassle, especially when the soup aisle is full of so many options of canned soup. After all, a can of soup is a quick and easy choice for lunch or dinner, and it can help you keep fit and fight illness, right?

Actually, that’s not exactly true. A can of “healthy” soup can just be a container full of toxins and processed foods. Are there any dangers of eating canned soup? Let’s take a look at what’s really inside that can of soup you were planning to feed your family.

Toxic Soup Ingredients to Watch Out For in Canned Soup:

Most soups come in cans, and most cans contain BPA. BPA is an endocrine disruptor that has been tested in lab animals. According to the NRDC, studies have linked it to early onset puberty, reproductive abnormalities, obesity, insulin resistance, and pre-cancerous changes. So how bad is your exposure from eating canned soup? CBS News reported on a study in 2011 by Harvard School of Public Health that showed that people who ate canned soup daily just for 5 days had more than “1000 percent increase in urinary BPA” over people who had fresh soup for 5 days. While the conclusions of this study are debated, it goes to show that this toxin may easily and quickly build up in your system. BPA cans are one of the biggest dangers of eating canned soups.

This additive is often used to flavor canned soups. MSG can cause migraines, headaches, abdominal cramps and other symptoms in people who are sensitive to it, but is it a danger to anyone else? This controversial additive is “generally recognized as safe” (GRAS) by the FDA and it is required to be labeled, however, companies can work around this labeling. Glutamic acid may occur naturally in some foods; the problem comes with MSG that is created through manufacturing or fermentation. This sounds confusing, but what we are talking about is called “processed free glutamic acid”. According to Food Matters, studies have linked this MSG to weight gain, liver inflammation, and more. A study also showed behaviors, endocrine related issues such as delayed puberty, and other troubles in mice injected with MSG. In 1969, Dr. John Olney, MD, discovered that MSG “destroys neurons in the developing brain”. This is a highly controversial topic to be sure, but when it comes to my kids, I err on the side of safety and caution. For more information on this debate, read “MSG is Dangerous: The Science Is In” – including the comments – at Food Regenade before deciding.

In addition, while a brand may not be directly putting MSG into your soup, MSG can be found in other ingredients and can hide under names. MSG is always present in autolyzed or hydrolyzed ingredients (such as protein), yeast extract, yeast nutrient, gelatin, sodium or calcium caseinate and textured protein. It’s often found in bouillon and broth, stock, whey protein items, natural or other flavorings, citric acid, barley malt, soy proteins, sodium citrate and more. See a complete list of items at Truth in Labeling.

Canned soup is often high in sodium, with upwards of 400mg in a can. For example, according to Fooducate, Progresso’s Lentil Soup contains a whopping 810mg of sodium per serving. Americans already eat too much sodium, according to research conducted by the 2015 Dietary Guidelines Advisory Committee. (Guidelines are published every 5 years and typical sodium levels in the American diet were also too high in the 2010 study.) Most canned soups are extremely high in sodium, making this a potential risk when eating canned soup.

If you’re not seeing “USDA Organic” on the label, your soup likely contains GMOs, especially if they are made with corn, soy, sugar or other additives that come from GMO plants. Much of the produce used is also treated with pesticides and herbicides. 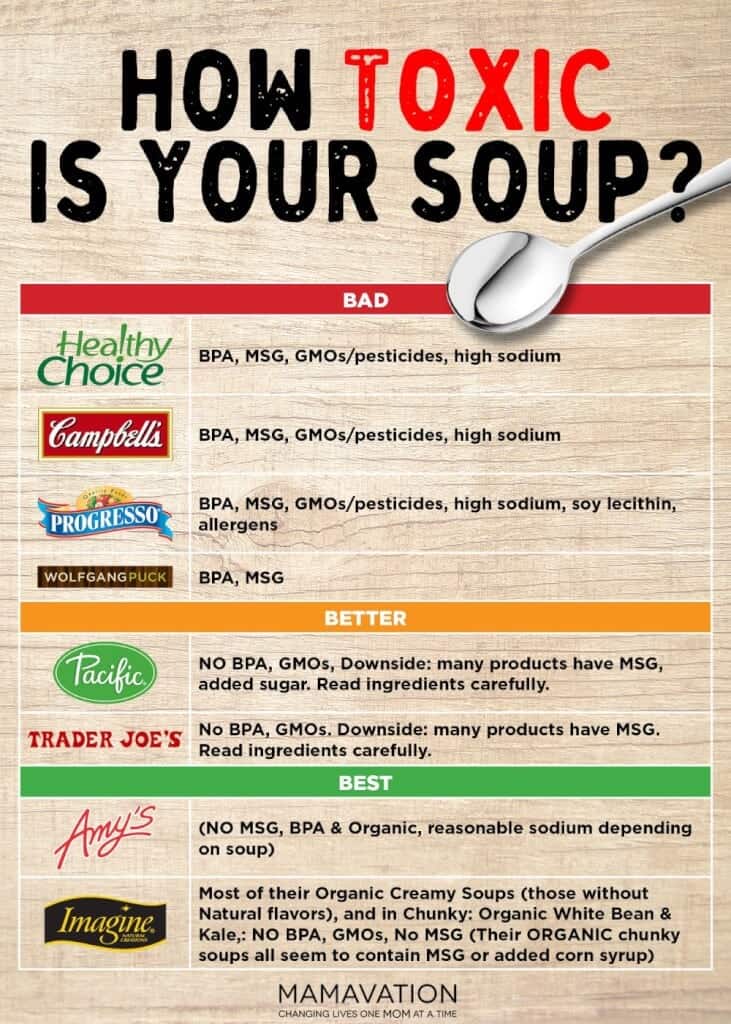 Most of the popular brands of canned soup that you will find on supermarket shelves contain these toxic ingredients. Here is a list of the most toxic soup brands on the market.

Unfortunately, the Healthy Choice website does not list the full lineup of ingredients, only the main one or two. I had better luck at Fooducate, where I found the ingredients for Healthy Choice Country Vegetable Soup. This brand is high in sodium (480mg), contains sugar (4g) and has several items that may contain MSG. However, this soup also contains disodium inosinate and disodium guanylate, which, according to Be Food Smart, are ineffective without MSG, so we can logically conclude that this soup contains MSG. Healthy Choice Soups contain lots of ingredients that are highly processed. Though low in calories, I don’t believe that this is the healthiest choice for canned soup.

Campbell’s Soup lists nutrition facts on their website but no ingredients. And, in fact, there is a disclaimer about their nutrition facts: “The nutrition information contained in this list of Nutrition Facts is based on our current data. However, because the data may change from time to time, this information may not always be identical to the nutritional label information of products on shelf”. So even if I picked up this product in the store, there’s no guarantee it would match what’s stocked in your grocery store. In addition, Truth in Labeling wrote an article about how Campbell’s claims it does not use MSG. However, by defining MSG on their website strictly as “an abbreviation for monosodium glutamate”, they can legitimately use the label “no MSG” on anything that has MSG under a different name.

In addition, while I could find no recent information on Campbell’s removing BPA from their cans, they did pledge in 2012 to do so by 2015. Let’s hope they make those changes by the end of the year. I was also impressed to learn that Campbell’s Soup now carries organic soup, which is packaged in cartons rather than cans. Both steps bode well for another mainstream company taking steps to respond to consumer demands for cleaner, safer food.

We’ve already seen that this brand is very high in sodium, especially their Progresso Lentil Soup and even their Healthy Choice Traditional Lentil Soup. The good news is that Progresso does list its ingredients. I took a look at their “Heart Healthy Savory Garden Vegetable”. Ingredients include hydrolyzed corn protein, so it’s very likely this soup contains MSG. It also contains modified food starch, which can be made from wheat or can be processed to have gluten, egg and milk, so you will want to avoid this one if you are sensitive or allergic to those foods. It also contains soy lecithin, which is derived from GMO soy and may have traces of the neurotoxin hexane. Finally, it has added corn syrup and caramel color. I would avoid this soup altogether. Most of their soups come in a standard BPA lined can, except their “Artisan” line, which contains similar ingredients.

This was interesting because on their website they state: “Wolfgang Puck’s all natural soups are preservative-free and contain no added MSG, except for that which naturally occurs in autolyzed yeast extract”. It’s my understanding that the process of autolyzing yeast produces the kind of MSG you want to avoid. In addition, their cans are not BPA-free. There is no information on ingredients available on website, however Fooducate lists the ingredients for their Organic Hearty Garden Vegetable Soup, which contains 690 mg of sodium, sugar (7g) and “natural flavors”. I would avoid this canned soup as well.

UPDATE: At the behest of one of our readers, I reached out to Wolfgang Puck to find out whether they are indeed going to be incorporating BPA-free cans. Here is their response:

“For more than 40 years, BPA has been safely used in the linings or lids of metal cans, including many used by Wolfgang Puck. Our current can packaging is one of the safest in the world. In fact, expert regulatory bodies around the world have declared that BPA is safe for food packaging. According to extensive scientific evidence, the use of BPA in can linings poses no threat to human health. However, we understand that some consumers still have concerns around BPA. That’s why we are exploring packaging formats and working to phase out the use of BPA in our product linings.  We are researching alternatives from the U.S. Food and Drug Administration’s list of approved food contact materials.  Once safe and effective alternatives are identified, we will begin the transition.”

I was hard-pressed to find canned soup that was 100% free of MSG, but there are better options available.

While these soups are packaged without BPA in Tetra Paks and are organic, many of their soups have MSG and added sugar. Read ingredients carefully.

I found only the tomato varieties of canned soup to be safe at Trader Joe’s; that is, distributed with BPA free packaging and organic ingredients. However, many products have MSG. Again, read ingredients carefully.

Amy’s makes a variety of  organic soup flavors in BPA-free cans, but you can also check out their website to ensure they are free of other items you may be concerned about (soy free or gluten free, for example). Amy’s claims that their organic flavorings are “100% pure herbs & spices (no hidden ingredients)”.

While not all of their soups are organic, Imagine stocks all their soups in a Tetra-Pak rather than a can. In addition, some of their organic chunky and creamy soups do flag for MSG, so read the labels carefully when purchasing. Some of these also have added sugar, but there’s still a variety to choose from that are MSG-free and organic.

Best Choice? Make Your Own Soup

Of course, the best way to avoid the dangers of eating canned soup is to make your own. Both fresh-cooked meat broth and bone broth are wonderful for balancing the gut and supporting your body to help you fight illness, particularly if you are cooking with grass fed or organic meats and organic produce. If you are connected to a CSA, you have a great excuse to use all those vegetables in a soup. Cooking soup is also easier if you have a crockpot – I say this as someone who hates to cook! Simple chop up your ingredients, season, add water and press the “soup” button or set the timer as directed.

Need more help? I don’t blame you! Soup intimidated me until I tried it and it turned out just fine. Here are some expert “real food” bloggers to help you get started with making soup at home and inspire you with soup ideas you thought you could only order in a restaurant.

What is your favorite soup to make to keep your family warm and healthy in winter?