It’s happening again! Do you remember “pink slime?” It’s back and with a vengeance, but this time the United States Department of Agriculture has reclassified the product once referred to as “pink slime” or “lean finely textured beef” as “ground beef.” So this means the next time you go to the grocery store to purchase ground beef, you could come home with pink slime instead. Would you like to avoid eating “pink slime?” We can help you! You’ve trusted Mamavation to bring you topics like bisphenol are linked to weight gain and how to avoid them, what do all the meat certifications mean, & 25 wellness books to read this year, now join us as we report on how you can avoid serving up pink slime in your kitchen, especially the lean beef trimmings. 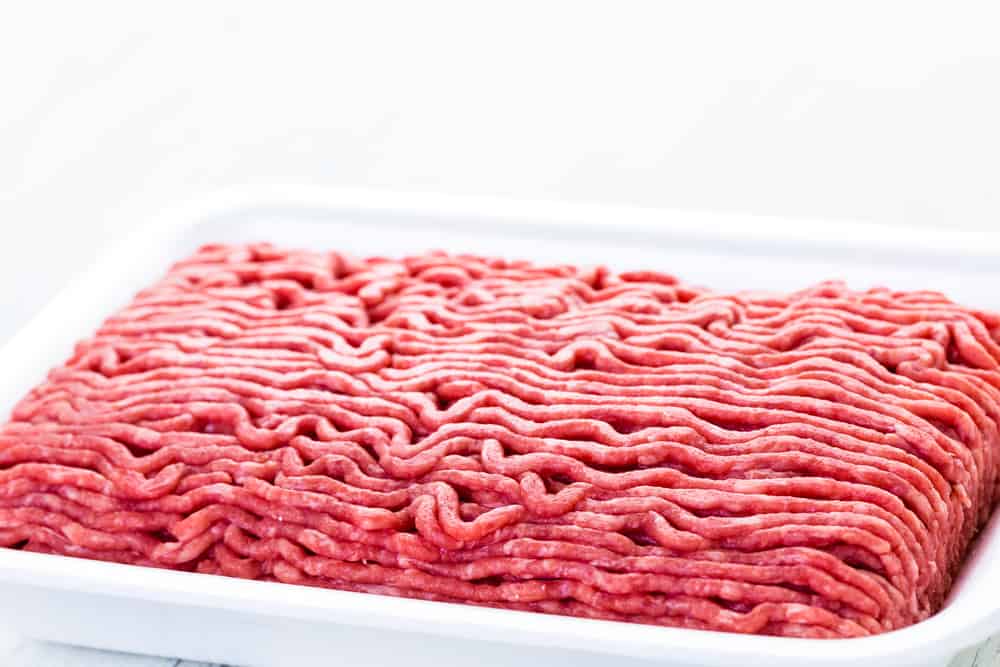 The Drama Behind “Pink Slime”

Beef Products Incorporated (BPI), the original manufacturer of “pink slime” ammonia treatment was investigated by blogger Bettina Segal from The Lunch Tray. She started a change.org petition that garnered thousands of signatures from the public upset that close to 70% of ground beef wasn’t labeled as “lean finely textured beef” as it should have been. In other words, this is a form of fraudulent labeling.

Later, the story was covered on ABC news. A public backlash quickly ensued which plummeted sales of “pink slime” after grocery stores pulled them from their shelves and millions of Americans started asking restaurants about their hamburger contents. BPI, owner of this new production process, closed several of its plants and laid off about 700 workers after the story hit. They were on the verge of bankruptcy.

BPI filed a defamation lawsuit against ABC News in 2012. In 2017, the lawsuit resulted in a settlement of $177 million. Today, not only is BPI richer, but they are now allowed to sell their product to us as “ground beef.” That’s because the United State Department of Agriculture’s Food Safety and Inspection Service (FSIS) recently said that “finely textured beef” meets the “regulatory definition of ground beef” and can be labeled as such from now on.

It seems like “pink slime” from BPI’s plant has received reclassification.

“We approached USDA about the possibility of reclassifying our product,” said Nick Ross, BPI vice president of engineering. “It was an extensive review that took well over six months and included consumer reviews, nutritional panels, tours of the plant where agency folks could get a first-hand look at the process and understand what we are doing at BPI.” 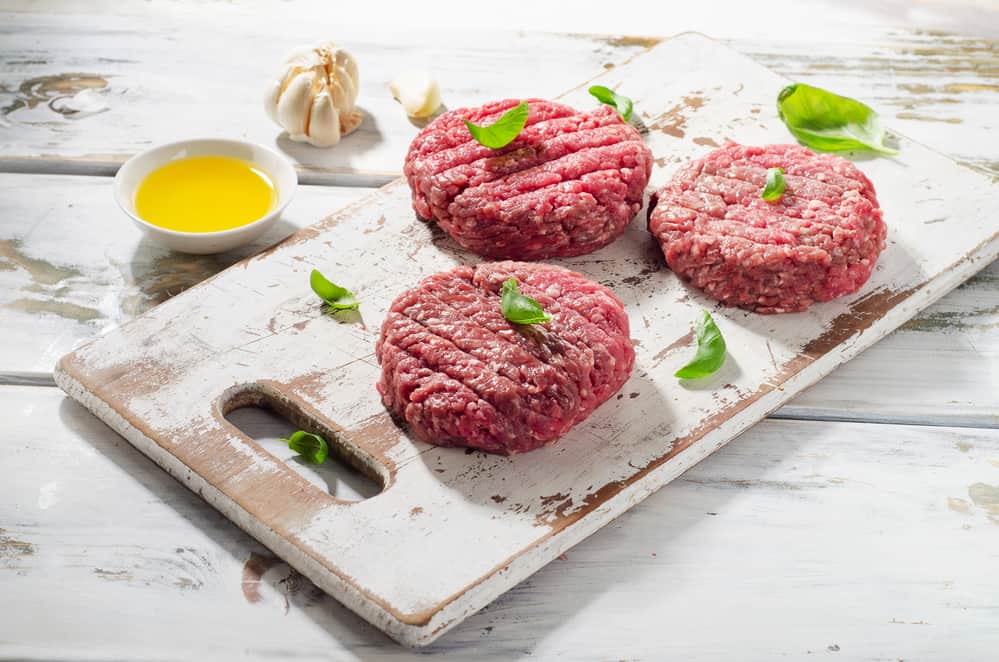 What is Pink Slime?

“Pink slime” is a type of ground beef that has been treated with ammonia to keep bacteria or other pathogens like salmonella from forming. The process starts with cuttings and trim from cattle carcasses that are sliced up into little steaks and sent away to be turned into ground beef.

Ground beef can contain no more than 30% of fat, so the processing facilities have to treat them a bit to match the rules. First, the trimmings are heated to about 100° F, then put into a centrifuge to separate the fat tissue from the muscle tissue. Then the muscle tissue is treated with ammonia to keep bacteria from forming. 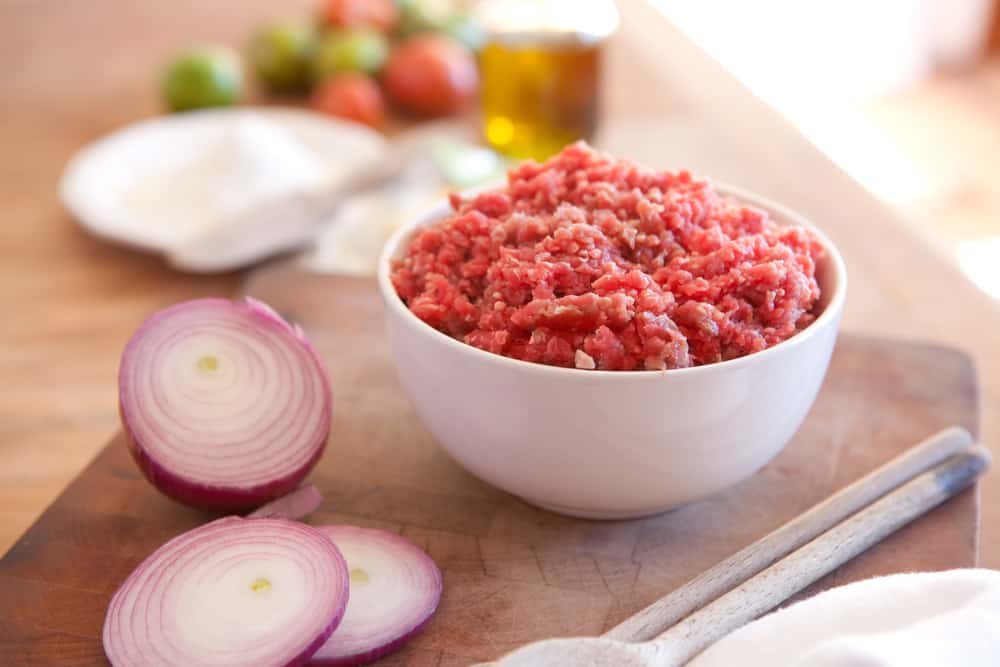 How Is This Going to Change My Food?

However, grocery stores were obligated to let you know if they were adding it to their beef, so now it doesn’t matter if you ask.

They don’t have to tell you. But there are other things you can do to ensure you are not eating a hamburger made of “pink slime.” 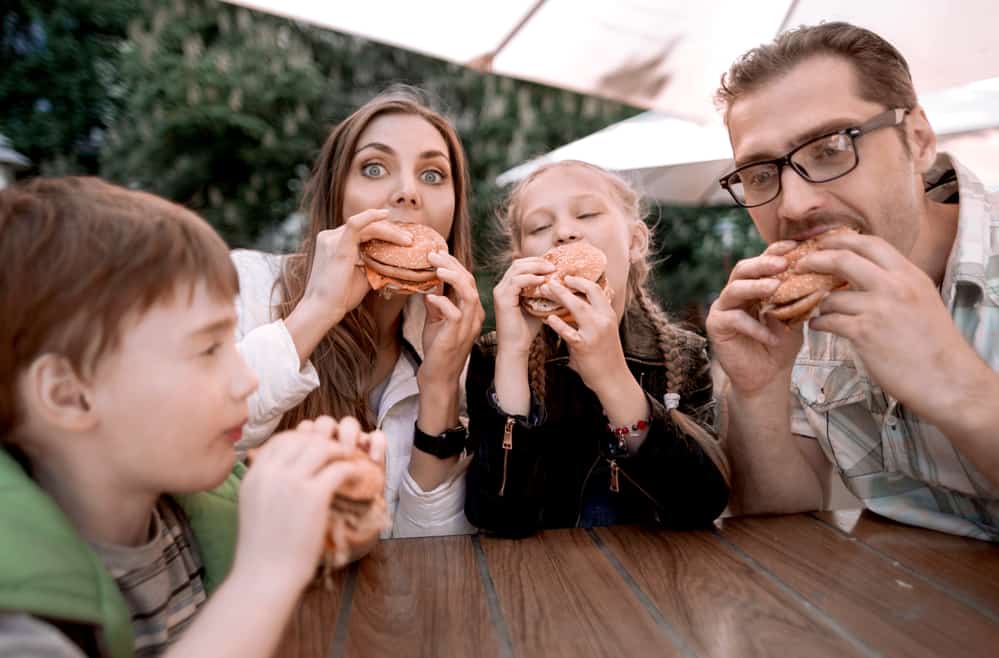 How to Avoid “Pink Slime” in Your Hamburger?

There are three choices in front of you to ensure that you are not eating ground beef treated with ammonia, aka “pink slime.”

The organic standard prohibits manufacturers from treating meat with ammonia to fight bacteria. Organic also doesn’t allow the use of dyes to keep the meat looking pinker longer. So picking up USDA certified organic meat is a safer option.

When it comes to grassfed meat, the USDA recently dropped all the grassfed claim standards. That means pretty much any company can make the claim of “grassfed” meat, even if the cow was only 1% grassfed. In other words, unless you are purchasing a cut of meat from a ranch that is certified grassfed from the American Grassfed Association (AGA) or Pennsylvania Certified Organic (PCO), you could be getting anything. In addition to that, your meat could also be labeled “made in the USA” without actually coming from the USA. I wish we were kidding, but the grassfed industry is a bit of a cash cow right now. Buyer beware! 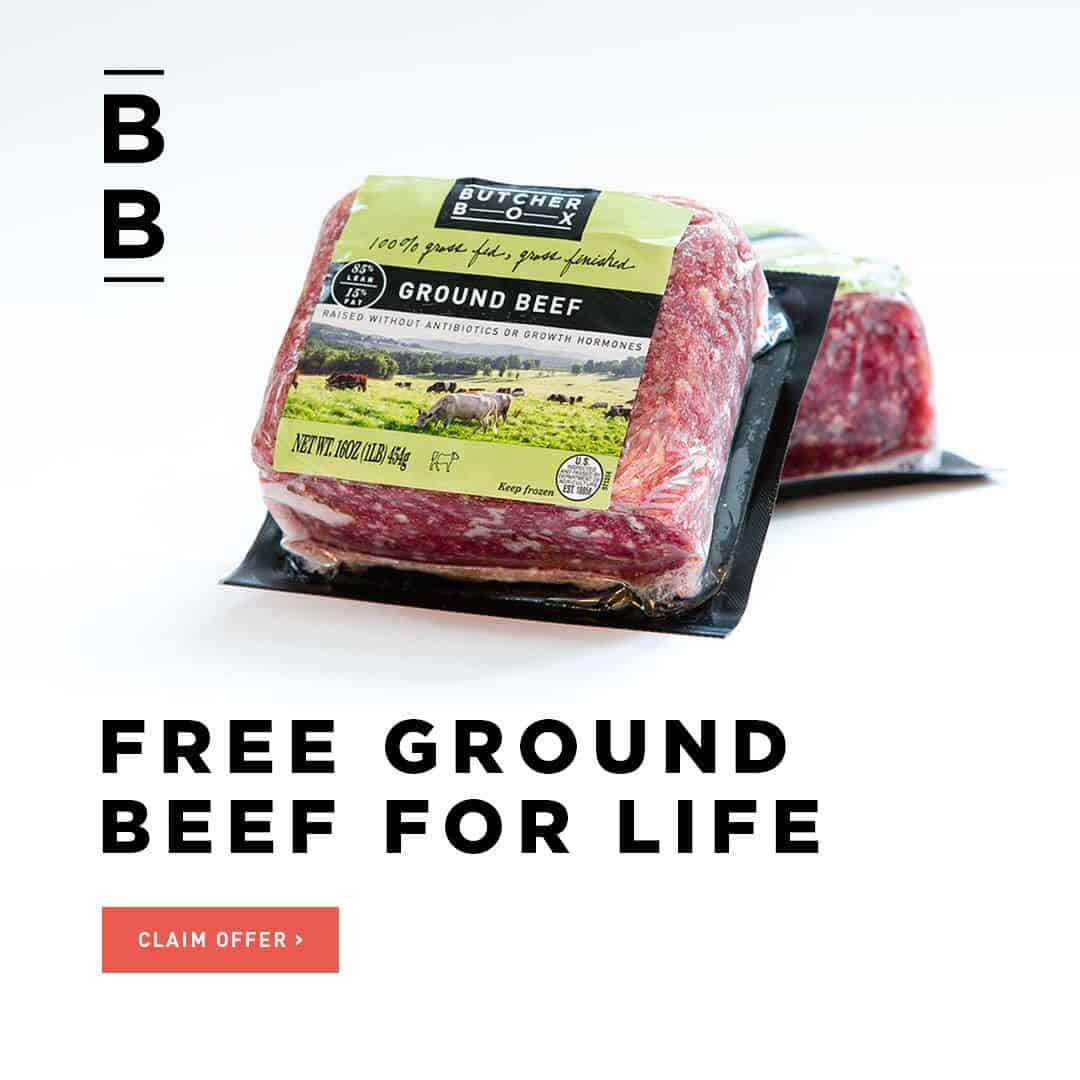 Pick Up Ground Beef From ButcherBox

One company we know that produces 100% grassfed meat and doesn’t use ammonia to treat for bacteria is ButcherBox. This is a company that delivers grassfed meat, organic chicken, heritage pork & bacon, and wild-caught salmon from Alaska to your door. And today they have a special promotion that you can take advantage of! ButcherBox is offering 2 lbs. of ground beef FREE for life every time you order a box. This is available for a limited time only.

Let’s face it. We could all probably use less meat, especially from places like McDonalds on Meatless Monday.

Conventional beef is not only problematic to your health, but it also contributes to the amount of CO2 in the atmosphere through methane produced from the cow’s upset stomach. And it’s not cow farts like everyone says. It’s cow burps that are the problem.

If you looking for vegan alternatives, you are in luck. There has been a 22% increase in vegan meat sales to $1.5 billion in 2018. In other words, there are plenty of selections today. Here are some of our favorites.

Burts Bees Makeup PFAS “Forever Chemical” Lab Results
Next Post: Best Non-Toxic Shampoo & Conditioners of 2022: What Brands to Avoid and Our Must Use List