Have you ever wondered what was inside the dishwashing detergent you’ve been using? Does this product contain any chemicals that are harmful to humans or the Planet? Mamavation took a look at the top 100 dishwashing detergents and evaluated them based on the ec0-friendly ingredients they contain, including dishwasher pods. You’ve trusted Mamavation to bring you topics like the safest non-toxic dishwashing soap, safest cookware sans PFAS & nanoparticles, safest laundry detergent, and the best collagen tested for heavy metals & phthalates, now join us as we bring you our investigation of non-toxic dishwasher detergent products and which are best for humans and the Planet.

Dishwashing Detergents Have Improved Over The Years, Yet Most Still Contain Toxic Ingredients That Disrupt The Planet

Dishwashing detergents are made with chemicals that clean dishes, soften water, prevent spotting on plates, and add fragrance. They need to be strong enough to get the crud off your dishes, but gentle enough to not damage aquatic life and yourself.

Phosphates were once the main ingredient in most dishwashing detergents. In 2010, seventeen U.S. states implemented mandatory bans on the sale of phosphates in automatic dishwasher detergent because of the concern of it’s adverse effects to rivers, lakes & streams. Those states were Illinois, Indiana, Maryland, Massachusetts, Michigan, Minnesota, Montana, New Hampshire, Ohio, Oregon, Pennsylvania, Utah, Vermont, Virginia, Washington, and Wisconsin. Excess phosphorus leads to harmful algal blooms that kill aquatic life and plant growth. Most dishwashing detergents have removed phosphates from their formulations so they don’t have to produce different formulations for different states.

However, there are still lots of problematic ingredients used in dishwashing detergent. The major problems revolve around the following issues:

Because most of the chemicals used in dishwashing detergents are washed off with hot water, the primary concern is really toxicity to aquatic organisms and that feedback loop comes back to us in the food chain.

With the growth of the natural products movement, better options have arrived on the market. Most of the work is accomplished with super hot water and the angle of your dishes in the dishwasher. Since most products contain something that would be problematic, this category isn’t perfect. For this investigation, we’ve done our best to rank products based on the amounts of problematic chemicals we noticed.

Most dishwashing detergents have at least one or two or perhaps a dozen chemicals that can harm aquatic life, potentially disrupt human hormones, and/or are linked with cancer. Within those dishwashing detergents are intense chemical concoctions including surfactants, emulsifiers, viscosity regulators, chelating agents, anti-scaling agents, artificial colors, preservatives, stabilizers of whiteners or oxidants.

Here are some basic categories to try to avoid OR lessen when purchasing dishwashing detergent:

When you see the word “fragrance” on an ingredient panel, it’s basically telling you that they have decided to hide ingredients from you. That doesn’t necessarily mean they are toxic, but if they weren’t, wouldn’t they use that as a marketing advantage? “Fragrances” can hide hundreds of chemicals some of which are toxic to humans and the Planet.

One example of a hormone-disrupting chemical that can hide in “fragrance” is phthalates, which are used as a solvent to extend the aromatic strength of fragrance. The Fragrance trade group International Fragrance Association (IFRA) decided one year to post a list of the potential chemicals that can be found inside the word “fragrance.” Later, they took it down. You can go to their website here and see for yourself what a lack of transparency looks like. The link no longer works.

Polyacrylates are used as dispersing agents and for calcium complexation in washing and cleaning agents. They are nonsurfactant suspending agents that have film-forming and binding abilities that are used in dishwashing detergents. The concern around acrylates is the impurities that tend to coexist with them. Chemicals like acrylic acid, 2-ethylhexyl acrylate, and methacrylic acid, & acrylamide, have been linked to skin, eye, and throat reactions. The International Agency of Research on Cancer as well as the U.S. Environmental Protection Agency (EPA) have classified acrylates as a possible human carcinogen. They are also toxic to aquatic life.

Here are other serious health effects they are linked to:

You’ll find isothiazolinone preservatives like methylisothiazolinone to be very common in dishwashing detergents. It is linked to inhalation toxicity, contact dermatitis, allergic reactions, and possible neurotoxicity. These chemicals are not a great thing to have around the house. They are also extremely toxic to aquatic organisms.

This chemical is an antimicrobial agent found in cleaning products and some personal care products. It’s most known as an irritant to the skin, eyes, and lungs. Benzisothiazolinone is a known sensitizer, meaning it causes the body to react. And unfortunately, it’s also an environmental pollutant that is toxic to aquatic life.

Formaldehyde is a big problem. The International Agency for Research on Cancer (IARC) also classifies it as a human carcinogen, which means exposure is known to increase cancer risk. Formaldehyde is linked to problems like respiratory irritation, headaches, runny nose, nausea, difficulty breathing, and asthma attacks, according to the American Lung Association.

You’ll never see “formaldehyde” on a dishwashing detergent label, but that doesn’t mean these chemicals aren’t inside as a contaminant. Typically, it’s being released inside certain preservatives in order to kill bacteria and extend the product’s shelf life.

There is also a concern when formaldehyde-releasing preservatives are present in a formulation that also includes amines, such as triethanolamine (TEA), diethanolamine (DEA), or monoethanolamine (MEA). When this happens, nitrosamines can be formed, which are harmful substances that can potentially penetrate the skin and are linked to cancer.

Ethoxylation is a chemical process using ethylene oxide (EtO) to turn alcohol, acid, or triglyceride oil into a surfactant. This makes products interact better with each other and make them more effective cleaners. The biggest problem with these ingredients is their process of ethoxylation because it produces traces of 1,4-dioxane, ethylene oxide, both known carcinogens. It also produces polyethylene glycol compounds (PEGs).

California Proposition 65 lists ethylene oxide as a known developmental toxicant, and it also lists 1,4-dioxane as a cancer-causing ingredient.

There’s a little bit of overlap here, but we wanted to go over surfactants because they are so important to understand. Surfactants are one of the main ingredients you’ll find in dishwashing detergent. They are used to stir up activity on the surface that is being cleaned to help trap dirt and remove it from the surface.

Surfactants can either be anionic, nonionic, cationic or amphoteric, but in terms of dishwashing detergents, most of what you will see are anionic and nonionic surfactants.

One of the biggest problems with surfactants (anionic & nonionic) is their effects on aquatic life. So for the purposes of this investigation, the more and harsher surfactants used, the lower the product will rank.

PEGs (polyethylene glycol compondss) are petroleum-based compounds that are widely used in cosmetics & detergents. The largest issue with them is they may be contaminated with measurable amounts of ethylene oxide and 1,4-dioxane, both of which are carcinogens.

Although 1,4-dioxane can be removed from an ingredient during manufacturing with a process known as “vacuum stripping,” there is no way for a consumer to know if that has happened or not. A study was done on this issue years ago where personal care products marketed as “natural” or “organic” were analyzed at the lab and 1,4-dioxane was found as a contaminant in 46 of 100 products analyzed.

There are also some concerns about PEGs having some genotoxicity issues. So to be precautionary, Mamavation does not recommend any polyethylene glycol compounds. 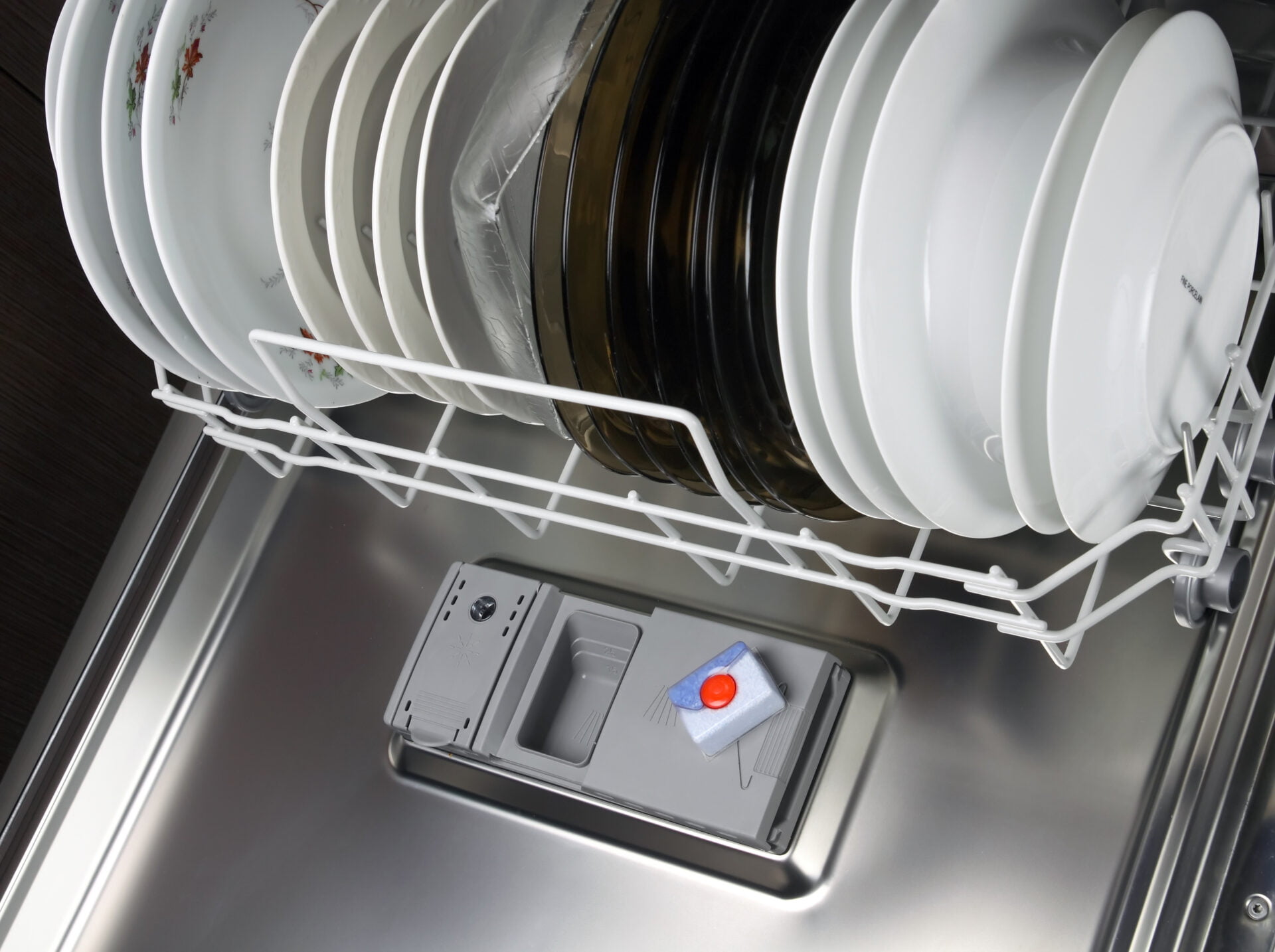 Unfortunately, very few brands would have passed our specs, but there are some additional complicating factors here. Some dishwashers cannot handle the “safer” brands without damaging parts of the machine. This is the reason why we do NOT recommend you go looking for DIY recipes for dishwashing detergent. While other dishwashers handle most of the “best” products just fine. Most of the commercial dishwasher detergents are made to not break your dishwasher, so this is why we recommend picking from this list and not going DIY.

However, we did not test them all out to be able to tell you which ones can be problematic for which dishwasher, so if you are switching, perhaps a gradual switch would be best. In other words, there are some compromises we must make to live in a modern world and perhaps the type of dishwasher detergent you have is one of them. 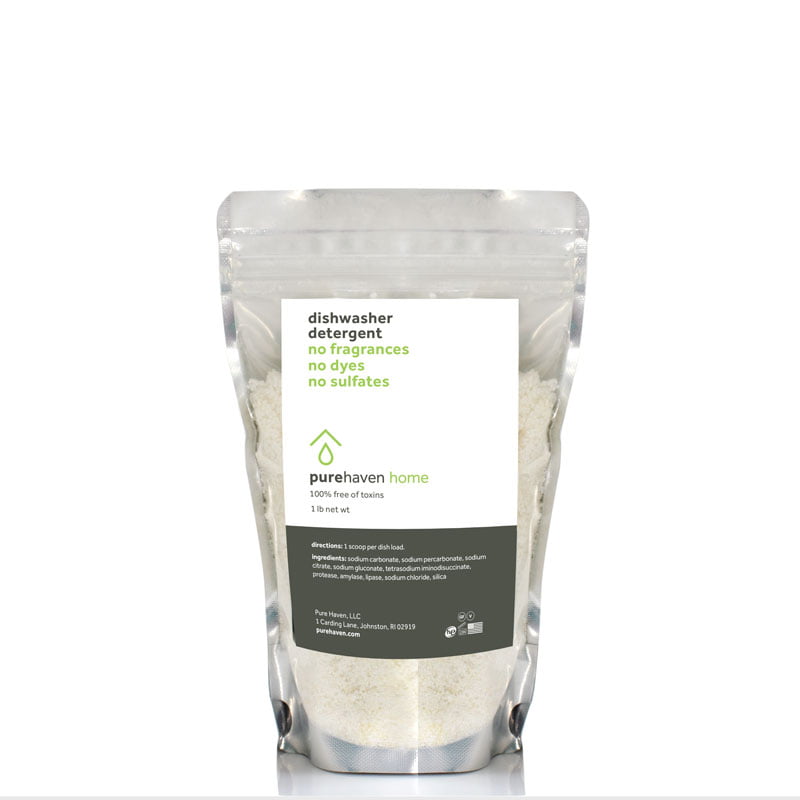 Pure Haven has some of the simplest dishwashing detergent ingredients out there. After searching through the ingredients of over 100 brands, you’ll see what I mean. This brand is always one of our favorites because they never use toxic ingredients and always have more control over the manufacturing processes than other brands. That makes you safer.  Most of the ingredients inside the dishwashing detergent are enzymes and essential oils to do the job safely, yet it’s formulated not to corrode your dishwasher. So give it a try!

Not Our Favorite Dishwashing Detergents

This is the happy medium list of products that have some problematic chemicals but will do a pretty good job of cleaning your dishes. If you have major concerns about the dishwasher, this is the list I would purchase from. Some products fell into this category for nondisclosure of ingredients, such as not disclosing fragrance, enzyme, or surfactant ingredients. Also note: Amazon ingredients were not used. We used the ingredients directly from their website, so you may notice some differences if you are looking to Amazon ingredients.

This list has the least amount of problematic ingredients that will do harm to people and the Planet. It’s possible that these products may impact your dishwasher. We have not tested them all out to be able to tell you how they will work with the machine you have because some dishwashing machines are more sensitive than others. Again, this is not a perfect situation. Also note: Amazon ingredients were not used. We used the ingredients directly from their website, so you may notice some differences if you are looking for Amazon ingredients.

Safest Baby Foods Without Heavy Metals or Perchlorate: 2019 & 2021 LAB RESULTS
Next Post: Not All Organic Milk Is Created Equal–Best and Worst Organic Dairies