The Dangers of Soda: 10 Reasons Your Kids Shouldn’t Drink Soda

Many of us have opted for healthier choices for ourselves and our family. It certainly isn’t an easy process to break bad habits and relearn everything you’ve been taught about food. This is why it’s even more important to stop bad habits before they start, whenever possible. We gave you 10 reasons to dump diet soda, which can be the hardest hurdle for some. Well, kids can be particularly susceptible to the dangers of soda, so here are 10 reasons to never let your kid drink soda:

The addictive properties of soda come from a number of its ingredients – first, the caffeine. Caffeine is the the most commonly used mood-altering drug in the world, says a report from Johns Hopkins. The report goes on to say caffeine produces a physical dependence. Those experiencing this admit to altered moods and not being able to quit caffeine, despite wanting to. Children are not immune to this dependence, and some might even say they are more susceptible to caffeine’s effects due to their smaller body weight. These addictive properties are one of the greatest dangers of soda.

Studies on sugar have had similar findings. Sugar leads to a dependence complete with cravings and withdrawals. Choosing a diet soda without the sugar isn’t a better option though. Artificial sweeteners actually trick the brain into wanting more, leading to dependence. Drinking soda may be more than just a bad habit, but an actual dependence that is tough to quit.

2. Soda has no nutritional value

Although this may seem obvious, one of the dangers of soda is that it doesn’t provide much needed nutrition to our bodies. It does, however, provide empty calories, and can suppress the appetite. Consuming soda may cause children to eat less of the foods they need to fuel their bodies. Those who drink soda regularly are also more likely to get less than the recommended amount of vitamin A, calcium, and magnesium, an important mineral to overall health.

A child’s brain is developing throughout adolescence. When a kid drinks soda, they are consuming chemicals that are altering their brain. MSG can be hiding in the citric acid of soda, as well as in the artificial flavors. This excitotoxin has been shown to damage the neurons in the brain of mice. In addition, high levels of excitotoxins have been linked to brain tumors, diseases such as Alzheimer’s disease and Parkinson’s disease, brain damage, learning disorders and behavioral problems.

Aspartame, found in diet soda, is causing the same effect. Long-term consumption of aspartame led to an imbalance in the brain. Aspartame’s methanol content is also concerning for brain health, as it converts to formaldehyde, a known neurotoxin.

One of the main dangers of soda is that drinking it regularly can actually deplete bones of much needed calcium. Phosphorus, a common ingredient in soda, leads to bone loss when in disproportionate levels to calcium. Caffeine is also a culprit here, as it is known to interfere with the absorption of calcium and bone density. Kids who drink soda are not likely to consume the necessary amount of milk or other calcium rich beverages.

There are many possible reasons for behavior issues from children who drink soda. It could be from the caffeine, sugar, artificial colors, or blood sugar spikes and drops. According to a survey of more than 3000 mothers, children who drank soda were more aggressive, withdrawn, and had trouble paying attention.

Sugar isn’t good for teeth, and neither are the acids within soda. Both the citric acid and phosphorus can wear away tooth enamel and lead to decay. Combined with the addictive nature of soda, teeth can be frequently exposed to this harmful beverage and be at risk for tooth erosion.

7. Soda is contributing to childhood diabetes

Mice fed artificial sweeteners, like aspartame found in diet sodas,  developed glucose intolerance, which can be an early sign of metabolic syndrome and type 2 diabetes. What’s more frightening, is simply drinking soda in moderation may not reduce the risk. As little as one single 12 ounce can of soda a day can increase the risk of developing type 2 diabetes by 22%.

8. Kids who like the sweetness of soda are more likely to be overweight

One two year study of 3-5 year olds determined that the consumption of sugary beverages significantly increased the likelihood of childhood obesity. In addition, children who developed a preference for fatty or sweet foods were more inclined to be overweight. Even choosing diet soda to avoid sugar won’t prevent this, because aspartame increases sugar cravings by telling the brain to consume more.

9. Soda can lead to heart disease

When we are talking about children, heart disease rarely comes up in the conversation. However, with the news that just one soda a day can increase the risk of a cardiovascular event by 61%, it’s a conversation worth having. That same amount of soda is also linked to a 19% increase in heart disease. Considering the risk of a soda dependence, children who begin drinking soda are more likely to consume it regularly. Over the span of their lifetime they will consume far more soda than someone who began drinking it in adulthood, increasing the risks and dangers of soda for children.

Soda and caffeine are diuretics and can lead to dehydration, especially if soda is replacing water. Sugar and caffeine can increase the level of acids in the stomach leading to irritable bowel syndrome (IBS). Carbonation is also a common IBS trigger, as it results in more gas.

What are the alternatives to soda?

When it comes to kids, water and milk are simply the best options if you want to avoid the dangers of soda entirely. Fruit juices are certainly a better choice than soda, but be wary of sugar content. If your child is in need of something more than just these options, there are a number of healthier beverage alternatives.

Mamavation readers can take advantage of a 25% discount by shopping through Thrive Market here.

Add chia seeds to a drink to get a better boost of energy, without the caffeine.

Get more nutrition out of your beverage with Orgain organic nutritional shakes. There are available in  both chocolate and vanilla, and some geared specifically for kids. 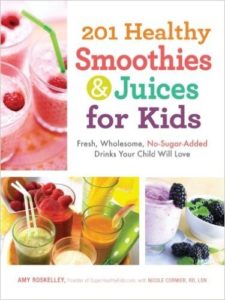 There are some excellent healthy drink options in this Ebook. Having your children help prepare a smoothie or fresh juice is also a great way to get them involved, and excited about trying something new.

You can also find some delicious fruit infused waters. Here you can find naturally flavored waters that are infused with fresh herbs and fruit.

These kid friendly juices from My Fussy Eater are colorful and nutritious. They are a great way to ensure even the pickiest eater is getting in their fruits and vegetables.

Try kombucha or a kombucha soda alternative. These fermented teas combine probiotics and antioxidants with delicious flavors. Live Kombucha Soda gives you the flavor of popular sodas, but with the benefit of kombucha. You can even get a kombucha tea starter to make it at home.

There are some concerns with giving kombucha to children, so make sure you assess the risks first. Look out for sugar content and don’t give kombucha to anyone with a compromised immune system.

Superfoods :50 You Should Be Eating
Next Post: Food Ingredients Banned in Other Parts of the World