Improve Your Winter Meals With These Vegetables

As the winter season approaches, you might be thinking of what winter meals you can prepare using your own homegrown crops. After all, winter isn’t the season when most vegetables are available for harvest. It’s also a time to think about saving money with shopping looming and extra energy bills making their headway. While Mamavation brings you such recipes on a budget as our organic Shepard pie for only $2.62 per person. Why not save money by growing your own in your backyard year round? So, what are exactly the best vegetables to grow in winter? Moreover, why don’t we improve your meal and save money in the winter with these vegetables?

First, we have the Jerusalem artichoke, which is actually related to the sunflower. This vegetable can thrive even if the nights are long and the temperature is cool. It survives the winter cold thanks to the fact that the edible tuber grows below the ground.

A single serving of Jerusalem artichokes can provide three grams of protein and 26 grams of carbohydrates. Protein is good for your muscles while carbohydrates will give you enough energy for the day. Likewise, a single serving has 2.4 grams of fiber that helps curb cholesterol levels, deal with constipation, and lowers the chances of having heart disease. It is even known to keep your blood sugar at a healthy level.

First, you must heat the olive oil in a cast iron skillet. Remember to use medium-high heat. Next, add the two pounds of Jerusalem artichokes and a quarter cup of water. Add any amount of kosher salt and ground black pepper to suit your preferences. Cover the skillet with a lid and let it cook. Do open the lid and stir the food from time to time.

Next, you will be preparing the sauce. First, put the rosemary and the unsalted butter in the skillet. Stir them for about four minutes to make the butter turn brown. Get the skillet away from the heat and put the aged balsamic vinegar in it. Stir the ingredients together and then put a spoonful of the brown rosemary and butter sauce onto the crispy Jerusalem artichokes.

Another good vegetable to harvest in winter is parsnips. While they take a long time to grow, you can plant them during the spring season after the winter frost. By the next winter season, the parsnips will be ready for harvest. They even benefit from the winter season as the cold temperature turns the starch of the parsnips to sugar.

Parsnips are incredibly nutritious. A single cup of it can provide six grams of dietary fiber, which is already nearly a quarter of the required fiber intake for men and women alike. In addition, soluble fiber largely makes up the fiber of parsnips, which is good as it is known to reduce chances of diabetes, stroke, and hemorrhoids.

Furthermore, a single cup of parsnips will give you 12 percent of the needed daily amount of potassium. This is known to reduce the risks of high blood pressure while also keeping your bones and muscles moving properly. If fiber and potassium aren’t enough, you’ll be glad to know that parsnips also have a lot of Vitamin C. This vitamin improves your immune system while preventing hypertension and heart disease.

First, you must preheat the oven to 300 degrees Fahrenheit. Second, shred both the parsnips and the celery root. Third, get a big bowl and put the egg whites, whole-wheat flour, chopped chives, mustard, salt, baking powder, and ground pepper there. Fourth, put the shredded parsnips and celery root in the bowl too and stir them.

Now, get a large skillet and heat two tablespoons of olive oil. Use only medium heat and begin to cook four parsnip and celery pancakes at a time. For every batch of pancakes, you must prepare a quarter cup of batter. Let the pancakes get cooked for three minutes on each side so they become golden. Put them in the oven to stay warm, and add some chives and sour cream if you want.

Brussels sprouts are meant to thrive even during winter. They are hardy enough, and the frosts that occur during fall can give these vegetables more flavor. You can harvest some of the young and small sprouts early on and let the others mature.

A single cup of Brussels sprouts provides four grams of protein and fiber each. In addition, this vegetable also has Vitamin K for your blood clot regulation, vitamin C for your immune system, and vitamin A for bone growth. Brussels sprouts also have manganese for cognitive functions, iron for muscle health, and folate for cell division.

This meal will only take 45 minutes to prepare and is good for two people. You will need the following: sea salt, black pepper, half a cup of chopped walnuts, a red onion cut into pieces, a bunch of Brussels sprouts, and two tablespoons of melted coconut oil.

First, you should preheat the oven to a temperature of 425 degrees Fahrenheit. Next, get a bowl and put the Brussels sprouts, chopped walnuts, and pieces of red onion together. Add the melted coconut oil and ensure that it is distributed equally. Add sea salt and black pepper according to your preference. Now, put all of them on a half-sheet pan and let it roast for 40 minutes. By this time, the Brussels sprouts should be lightly brown and good for eating. 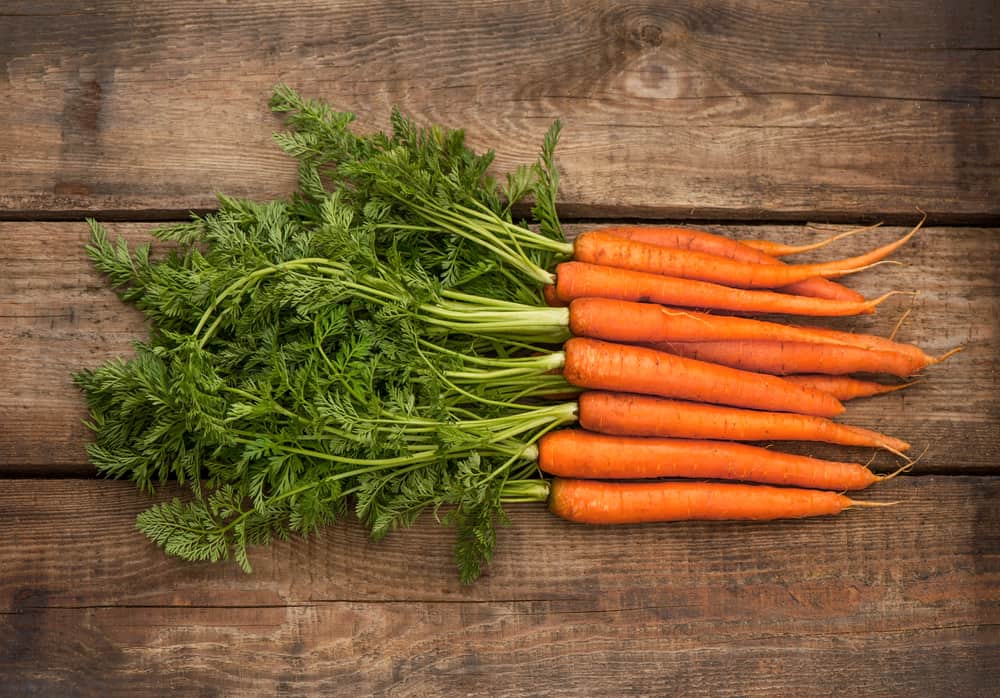 Carrots grow fast, so much so that you can harvest them in as early as November. Just like Brussels sprouts and parsnips, carrots benefit from the cold temperature as they become more flavorful. As long as you provide a deep mulch for your carrots before the frost arrives, they’ll survive the winter.

A carrot is largely made up of water, but it also contains carbohydrates and fiber for good digestion. The soluble fiber found in carrots comes in the form of pectin, and it helps in weight loss and in lowering cholesterol levels. Also, carrots are low-glycemic vegetables that are good for people with diabetes.

Doing this dish will take just 45 minutes and it will be good enough for four people. You will need the following ingredients: a quarter cup of chopped chives, kosher salt, black pepper, six shallots, eight chicken thighs, three tablespoons of olive oil, two tablespoons of white wine vinegar, and one and a half pounds of carrots.

Begin with heating the oven at a temperature of 450 degrees Fahrenheit. Next, get a rimmed baking sheet. Put the chicken thighs, carrots, and shallots on the sheet. Add a tablespoon of olive oil and half a teaspoon each of kosher salt and black pepper.

Begin to roast them for at least 30 minutes and toss the vegetables at least once. While waiting, put the chives vinegar, half a teaspoon of salt, and the remaining olive oil in a bowl. Finally, get the chicken and vegetables out of the oven and pour chive sauce over them.

We hope that this inspired you to use your winter vegetables to have delicious and healthy meals. If you have any questions, do give us a comment.

Author: Ann Sanders. Ann Sanders is a gardening blogger at AGreenHand. Her goal is to provide everyone with a wide range of tips about organic gardening. Find her on Twitter and Facebook.