Unsettling news has been circulating recently about asbestos, a deadly human carcinogen. This toxin is a fibrous mineral used widely throughout the U.S. during much of the 20th century. Even though negative health effects associated with asbestos have been known for over 100 years, asbestos is not banned in the U.S., allowing the toxin to create a variety of risks for many Americans. And on a personal note, asbestos killed my father over a decade ago. You’ve trusted Mamavation to cover ten toxins that lower the IQ of children, how toxic is your favorite brand of tampons, what to do if you don’t trust your water company, now join us as we show you five ways asbestos can affect your family and what you can do about it. 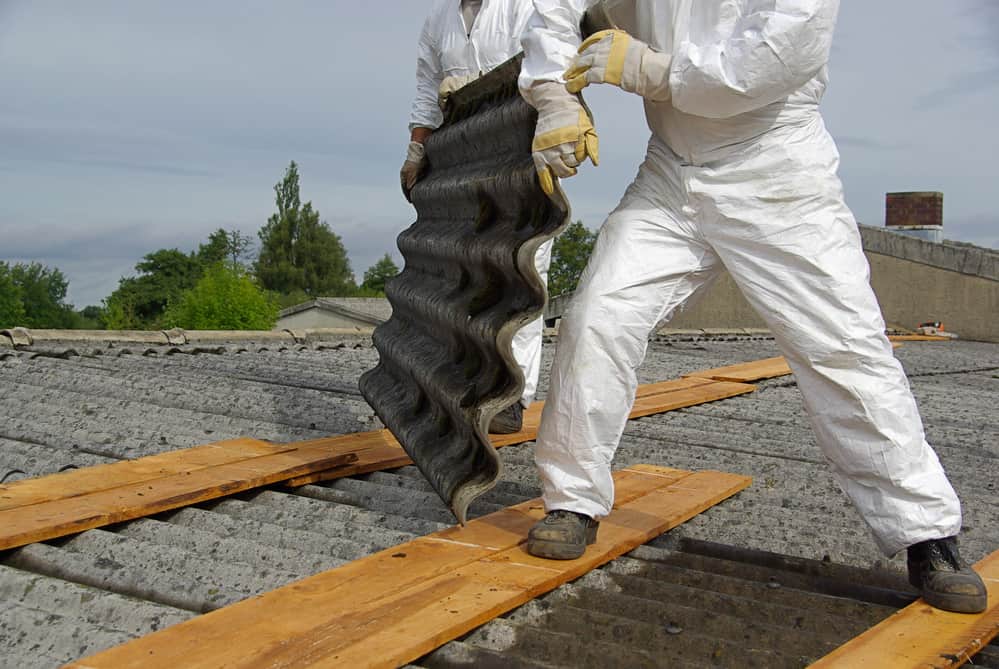 A “third wave of asbestos exposure” has gained attention in recent decades, and has the potential to threaten populations not typically associated with the toxin.  This “third-wave” refers to exposure that results from asbestos that was originally installed years ago getting damaged or disturbed during a construction, renovation, or demolition project. While asbestos is not necessarily hazardous when undisturbed, it is very dangerous if the material is displaced because it can release toxic asbestos dust and microscopic fibers. If these fibers are inhaled or ingested, they can lead to a variety of asbestos-related diseases, including asbestosis, mesothelioma, and lung cancer.

If you’re taking on home renovations, it’s extremely important to consider the age of your home and if asbestos might have been used in its construction. If your house was built before the 1980s, it is best to have a trained and accredited asbestos professional check your home for the presence of asbestos. The best thing you can do to ensure that your family is not exposed to asbestos during a renovation project is to stay away from structures containing asbestos, or to have the toxin professionally removed if it cannot be avoided.

Large amounts of asbestos were used in construction and manufacturing in the U.S. during the 1900s. This means that many buildings and portions of public infrastructure contain the toxic substance.

Like older homes, schools and other buildings may also contain structures made out of asbestos and present similar health risks. According to an article published in the LA Times, one-third of American schools still contain asbestos. If renovation or demolition work is done at school, or if older parts of buildings start to become worn, asbestos dust and toxic fibers could be released into the air. This could endanger anyone present in the building.

Similarly, instances like the July pipe burst in New York City serve as a reminder of the dangers these previous uses of asbestos present in our daily lives. Though no one was seriously harmed in the event, concern was raised over the long-term effects of toxic asbestos dust. In addition to the time it would take to clean up the surrounding areas and to ensure air quality was satisfactory, people worried the exposure could lead to asbestos-related diseases down the line.

For decades, asbestos has been detected in water supplies. The Environmental Protection Agency (EPA) has an established maximum contaminant level for asbestos in drinking water of seven million fibers per liter (MFL). The EPA has also confirmed that the two main causes of asbestos in water results from a decay of water mains and pipes that were historically made out of asbestos-containing cement and the erosion of naturally occurring asbestos deposits near watersheds. Though a 1996 report from the World Health Organization found that there wasn’t conclusive evidence linking the ingestion of low levels of asbestos fibers to significant health problems, more recent studies assert that the ingestion of asbestos-contaminated water over long periods of time could present health risks.

When evidence is conflicting it can be hard to gauge what to believe. For example, one case of contaminated water in south Texas in 2016 drew attention to the fact that residents could still be told that it is “OK” to drink water containing heightened levels of asbestos. These reassurances of safety are alarming given that “cancers of the esophagus, stomach, and intestine may be a greater concern” in areas where residents are exposed to asbestos fibers in drinking water.

Asbestos could be found in over 3,000 consumer products when it was at the height of its use in the U.S. Some of these products could still pose risks to you and your family, especially older appliances that were intended to create heat or remain plugged in for long periods of time. For example, asbestos was sometimes used in the wiring of crockpots. Today, if you have an older crockpot and the unit’s wire becomes broken or frayed, it could release dangerous asbestos fibers into the air or onto surfaces. Similar risks are present with a variety of other older products that contained asbestos, including items like hair dryers, toasters, and electric blankets.

Even though asbestos is heavily regulated today, it still seems to make its way into consumer goods. Unfortunately, there doesn’t seem to be a shortage of allegations surrounding products contaminated with asbestos. From years of discussion surrounding contaminated talcum powder, to children’s makeup testing positive for the carcinogen, to traces of asbestos in crayons, it’s frightening to think about toxins in products intended for children.

In addition to these recent issues, the EPA has been monitoring other contaminated products for decades. For example, the agency previously found that some vermiculite products, often used for lawn and garden potting soil, could expose people to asbestos because of contamination. In the case of these soil mixtures, the issue again is any dust that can be released when vermiculite is mixed with soil. Though the EPA determined the greatest potential risks could be for people who consistently work with vermiculite in potting soil, the EPA did recommend that consumers use premixed potting soils, which produce less dust.

The lack of an asbestos ban in the U.S. is a large contributing factor to these contaminations. In fact, products and materials are not formally considered “asbestos-containing materials” (ACMs) so long as they do not contain more than one percent asbestos.This is especially unnerving because no amount of asbestos exposure is safe, and any exposure can lead to a variety of adverse health effects.

Another factor you and your family should be aware of is the potential for asbestos regulations to change, resulting in the emergence of new risks. For example, a 2016 amendment to the Toxic Substances Control Act required that the EPA identify a list of chemicals and substances for safety and risk evaluations. Asbestos was one of the first 10 chemicals chosen for assessment. However, the EPA’s decisions on how to evaluate asbestos appear to have fallen short. In addition to limiting the scope of its risk evaluations for the toxin, the agency has decided not to place a ban on uses of asbestos that industries have already abandoned.

Instead of outlawing these previous uses of asbestos, the EPA proposed a “Significant New Use Rule” (SNUR) for asbestos in June 2018. This legislation would require that older, inactive uses be evaluated by the EPA before being reinstated, which could make it possible for these uses to reappear. It could also create a way to introduce new uses outside of the previous uses the EPA has identified.

While the agency has maintained that the proposed SNUR will actually help ban more uses of asbestos with a review process, many officials and organizations do not believe this is the case. Even though the SNUR would not remove any asbestos legislation currently in place, this framework could create new opportunities for asbestos use in the U.S.

One of the hardest things a family can encounter is the loss of a loved one. While any cancer diagnosis is devastating, learning that someone close to you has mesothelioma can be especially overwhelming because this cancer is almost always fatal. The prognosis for mesothelioma patients is especially poor, with most people living only one to two years after diagnosis. My father lived about nine months after he was diagnosed. For many, receiving this diagnosis can also raise questions because symptoms can take anywhere from 10 to 50 years to appear. With a latency period that is so long, it can be difficult to tell when someone was exposed to asbestos. This is one of the reasons why it is so important to try to avoid exposure of any kind in order to prevent a mesothelioma cancer diagnosis in the future.

Currently, asbestos is the only recognized cause of this rare cancer, so knowing the dangers of asbestos and how you and your family could be exposed to the carcinogen is extremely important. Mesothelioma Awareness Day, which takes place on September 26 every year, is a good time to think about where you might encounter asbestos in your daily life and what you can do to avoid exposure. From following recent developments in legislation to investigating the history of your home, there are many things you can do to make sure that you understand where asbestos could be present and the risks it poses.

What You Can Do if Your Private Water Company Is Sketchy–Simi Valley & Golden State Water Company
Next Post: SIGN THIS PETITION: Evidence Proves BPA is Dangerous–Demand Congress Ban Bisphenols NOW!