I’ve got to hand it to you BlogHer, you’ve done it again! You’ve partnered with a brand so antithetical to your message, It’s breathtaking. Since you’ve totally done this before, let’s take a stroll down memory lane and remind everyone. You’ve trusted Mamavation to bring you topics like our 2020 Holiday Gift Guide, best & worst cookware, & best & worst organic mattresses, now join us as we spill all the tea about Monsanto, BlogHer, and why evil brands bring bad karma.

Disclosure: this post is brought to you by lots of snark and a big middle finger to Bayer/Monsanto. May your karma be long and wide. 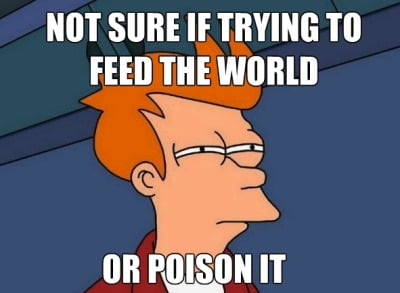 It’s 2020 ya’ll and having a green blogger conference headline Monsanto as a champion of the planet is not what you expected, but it’s going to happen this Friday at BlogHer Planet. So get your mighty fingers ready for a scroll and sip some tea while I tell you what you could be watching if you decide to participate in BlogHer this year or just give them the side-eye.

But before I get into that, I’d like to remind you that I predicted this happening many years ago. And ya’ll laughed at me because it sounded crazy! But it’s 2020 and I see you aren’t laughing anymore. So here it is, I TOLD YOU SO!!!!!!!!!!!!!!! Okay, now that that’s out of the way, let’s get back to the BlogHer event.

Overall the content is okay. They have some cool people participating, but it’s a bloody shame because it’s all sponsored by Monsanto…sorry, Bayer now. *eye roll* And with that halo of unholiness around their event, it looks as if it was created as an excuse to allow Monsanto to cash in on the newfound greenness that BlogHer just discovered.

But BlogHer has a history of unholy matrimony with brands that are antithetical to their message. Do you remember the Coke Wellness fiasco of 2013?

Thank You, BlogHer, For Starting ShiftCon–Kinda–Your Offensive Actions Sprung Us Into Action!

Did you know that ShiftCon Eco-Wellness Blogger Conference started because a group of bloggers got pissed off at BlogHer for unholy sponsorship alliances? It’s true.

That and the whole turning a blind eye thing.

2013 was the year that Coca Cola was the official “wellness sponsor” for BlogHer and on the expo floor in front of their booth, you were either asked to do jumping jacks for about a minute or take a picture of your pedometer and were then offered a Coke. (which btw, would have taken over an hour to burn off, but that’s beside the point.)

As absurd as that sounds, it actually happened.

It was part of a nationwide manipulation campaign that was studied and written up in the International Journal of Environmental Research and Public Health as an example of hardcore manipulation of teens and wellness influencers in order to hide the real health effects of sugar.

“The documents show that Coca-Cola tried to use public relations to manipulate teens into thinking that sugary soda is healthy when really it increases the risk of obesity, diabetes, and other ills,” said Gary Ruskin, a co-author of the study, and co-director of U.S Right to Know. “Tobacco companies shouldn’t tell teens what is or is not healthy, and neither should Coca-Cola.”

Sometimes the world of blogging showcases some of the most egregious marketing campaigns known to man…and this was an example of that at BlogHer.

Of course, we weren’t exactly silent back then either. Mamavation got involved organizing a Twitter party that trended asking BlogHer the simple question–WTF does soda have to do with wellness?

ABC news noticed that night because we trended with a large cast of prominent health bloggers. Only Coca-Cola responded to an ABC news request with this statement: “At The Coca-Cola Company we share a belief that when people come together real progress happens. We support BlogHer ‘13 because it brings together diverse audiences and perspectives. It’s in that spirit of sharing and learning, that women across the country have told us they want to know how The Coca-Cola Company is addressing challenges like obesity. This week in Chicago we’re looking forward to sharing information on how we are offering more no- and low-calorie beverages, up-front and clear calorie information on our packages and in vending machines, and supporting physical activity. We also hope that people will join us during our “steps challenge” at the conference – more than 300 people have registered already – and engage in some healthy competition that supports active living. By working together with women, families, and health experts – we hope to inspire and improve health in communities everywhere.”

That’s nice. They have pedometers.

So we packed up our stuff and flew to Chicago to witness this charade and throw them eye daggers across the room. And just before we couldn’t take it anymore, the last night of BlogHer ushered a changemaking moment.

A core group of us hung back and gathered in a bar having drinks and discussed the absurdity of what had happened and our frustrations at being ignored.

I started to talk about my personal frustration of not hearing any response from BlogHer after all that work contacting them. Silent as the grave. I went on to talk about how I felt we needed our own event where we could draw a line in the sand and only partner with brands that mirror our ideals. We could create our own world and save haven for green bloggers, brands, & NGOs as a sort of triangle of support for the food movement!

And that’s when it happened.

“Leah, you should totally plan that conference!” “Yes, Leah!” “OMG Leah it would be amazing!”

No guys! I wasn’t actually volunteering. Do you know how time-consuming and challenging events are to plan? Not to mention all the extra effort to provide all the green-living extras? I mean, we ARE admittedly a high maintenance group. I’m not even sure it would be possible. I’d have to have a non-GMO meal sourced by sponsors, negotiate a special contract with the hotel that allows us to do that, have brands subsidize the costs of the tickets so we can bring those prices down, just say no to plastic…

…and flip the bird at the chemical industry the entire time…gosh, that part would be fun.

My mind was spinning just thinking of the logistics because I had planned events before, but nothing this big. Not hundreds of bloggers over three days big.

I looked over to some of the other women there that were PR professionals representing organic brands and I asked them if they would support such an idea. “YES WE WOULD LEAH!! YES, WE WOULD!!” And then all the bloggers one-by-one said they would go in a heartbeat.

I dunno guys! I’m gonna have to look into this.

Well, I did, and we celebrated the first ShiftCon in 2014 with over 300 attendees at our first sold-out event.

After leading the event for four years, I retired and welcomed Ari Adams as its new leader to carry the torch forward welcoming more diverse voices to the environmental & health blogging world.

It’s started with hope and faith that we could pave a new way in the sand and has grown to literally change the culture online and now expanding the tent and celebrating diversity with new leadership.

But we are still flipping Monsanto the bird…and Coke too! 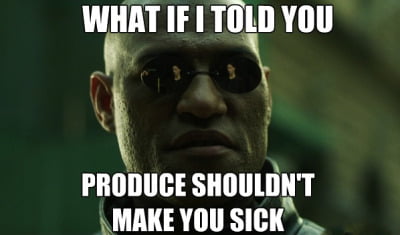 Okay, Spill It! Why Is Monsanto (Oh Sorry Bayer!) Such an Evil Company?

Monsanto is in an elite class of evil sharing the stage with Apple, Nestle, Phillip Morris, & McDonald’s as the evilest companies in the world. That’s just an appetizer for you, so let me give you the Cliff notes on why this company doesn’t belong in a conversation about planet health…unless of course, they buy their way into the room, which is what just happened. 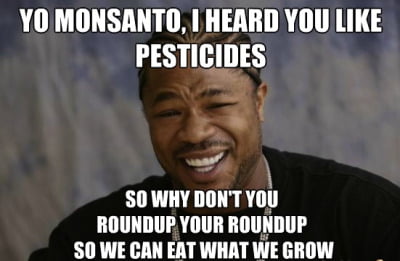 Did You Know That Monsanto Has Harassed Me in Front of Thousands of People? Fun Times Feeling Unsafe.

It was 2015 when I was on an anniversary trip with my husband when my phone started buzzing like crazy. You know when you are having a moment so you want to ignore your phone? Well, my phone didn’t stop buzzing and that was because 42 people were messaging me on Facebook, Twitter, & messages at the same time.

What was the problem?

Oh nothing of mention. Just communication from the evilest company in the world directed at me personally.

An email was just sent out to THOUSANDS of bloggers from Influencer Central Blogger Network. I’m guessing 10,000+ bloggers or more and it was all about Monsanto wanting to recruit influencers for a campaign. Everyone was curious about this because this was right in the middle of bloggers organizing to support labeling GMOs.

I guess they must have all had a conversation about me because question #6 was “are you an avid fan of Mamavation?”

All my friends it seemed got this email and were sending me screenshots of everything.

Monsanto, a multi-billion dollar company is focused on ME?

At first, I started to freak, then I was laughing at the idea of them making me infamous, then I went into freakout mode again. I went back and forth for months about this.

Seriously, how would you react if you were called out by the evilest corporation on the planet as someone they don’t like? Personally. In front of thousands of people.

It was legit harassment. I felt threatened. I had nightmares for months about people rummaging through my trash, taking pictures of my children, or watching my house.

That may sound paranoid to you, but honestly, how would you feel?

Most people that I knew that were activists had NEVER been called out by Monsanto. And these are people who are famous for their work! And here I organize mom bloggers (from my f*cking kitchen table might I add) and I get their attention right away.

It felt like the world was upside down. The idea that I was considered threatening enough to them to literally tell thousands that they didn’t want to play in the same sandbox with me…felt childish, dumb, and legit harassing.

They didn’t just complain or write about me, they told bloggers!

I wonder today if it was done on purpose to intimidate me or by accident by the network.

The network called me to officially apologize after the drama clearly wasn’t going away.  And the reason I didn’t tell you this story before was just that I got really busy.

Activism y’all. It keeps me on my toes.

Okay, maybe I was legit freaked out about it and wanted to let the dust settle for a bit but then totally forgot and life got crazy.

But I’m telling you today. 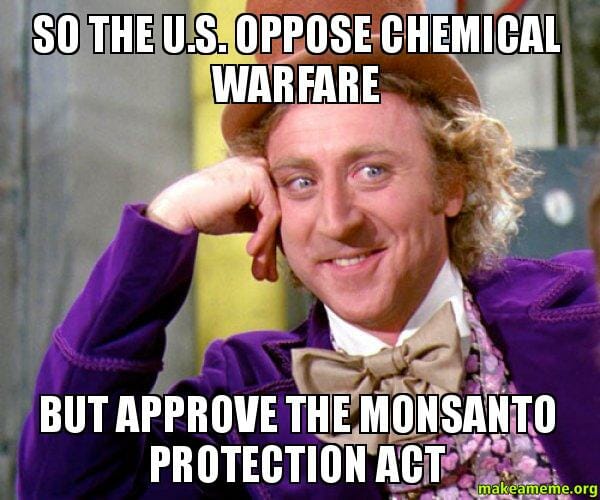 As we are having all these conversations about sustainability and what’s good for the planet, It’s important to be honest here.

Is the most sustainable option for the planet originating with a multi-billion dollar chemical company?  Ya know using chemicals that are designed to kill?

OR could it be possible that they’ve bought their way into our lives and we should just lock them out now like we do other companies that are naughty…like Phillip Morris.